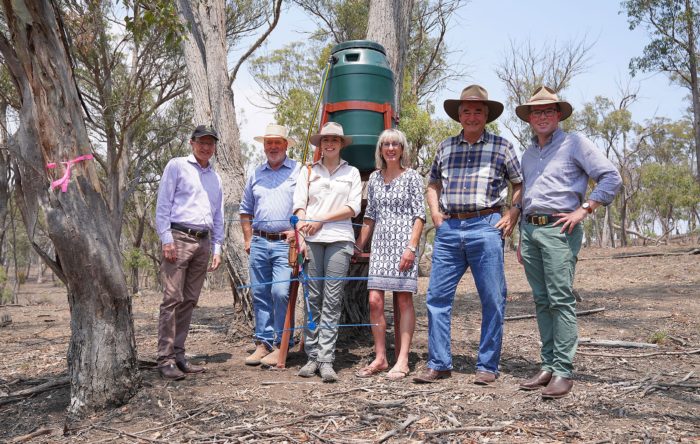 THEY’RE not quite a pub but Armidale’s thirsty koalas now have several new watering holes to drink from with 10 water feeders now installed around Armidale thanks to a $11,000 State Government grant, announced by Northern Tablelands MP Adam Marshall today.

The drinking stations are located in an area between Mount Duvall and Rockvale Road and will be replenished by volunteers from Southern New England Landcare and the Armidale Tree Group.

Mr Marshall said the feeders are a lifeline for local koalas at risk of dying of thirst.

“First drought decimates their eucalypt supply then fire rips through their homes – of all the native species currently doing it tough our koala populations are really suffering,” Mr Marshall said.

“These waterers, which have been built by Warialda a manufacturer Turner’s Steele, each hold 200 litres and have been installed close to the ground for easy access by our furry friends.

“Armidale Regional Council identified appropriate locations for the waterers with the support of researchers David Carr and John Lemon, who have been monitoring the movements of local koala populations for four years.

“It’s believed there is a relatively healthy population of koalas in the Mount Duval Tilbuster area and I thank ARC and the many local volunteers who are doing their part to ensure that remains the case during this dry time.

“Drinking stations have been successfully installed in other parts of NSW, including Moree, and we know that koalas and other native wildlife have been using them throughout the year.”

Armidale Regional Council Mayor Simon Murray said he was pleased to partner with the NSW Government and local environmental groups to help protect our koalas.

“Koalas are suffering from dehydration and travelling far for water – this will help keep some of them in their own territory,” Cr Murray said.

“Koalas are especially vulnerable to predators and being hit by vehicles when they walk significant distances in search of water and hopefully these feeders limit that risk.

“This fantastic announcement coincides with a koala tracking program to learn more about the locations and movements of our local koalas, so we can do more to assist the population.”

The NSW Koala Strategy, which provides $44.7 million in funding, is the biggest commitment by any State government to secure koalas in the wild. It sets out the NSW Government’s long-term vision to stabilise and then increase koala populations across NSW.