NEWELL HIGHWAY REST AREA RENAMING A SALUTE TO OUR HISTORY 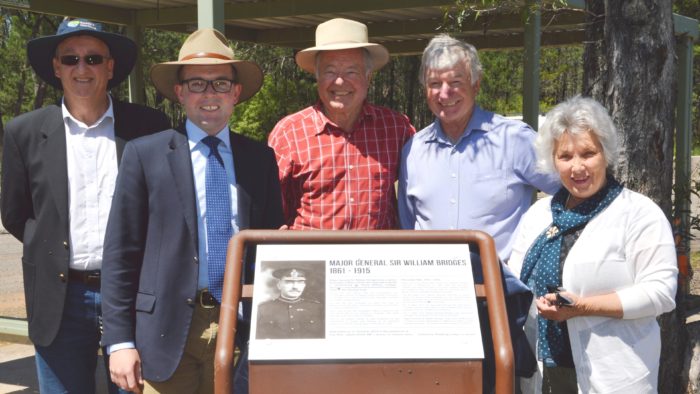 Mr Marshall unveiled the Sir William Bridges Rest Area on the Newell Highway about 25 kilometres south of Narrabri, near Bohena Creek, with new signage and a storyboard plaque with a photo of the late Major-General.

“The rest area was previously only known as the Pilliga No 2 Rest Area but this rededication personalises a high profile, stopping-off point for highway travellers with a well-deserved salute to one of our roads pioneers and ANZAC veterans,” Mr Marshall said.

“The ceremony was especially poignant because it was done in the presence of members of Sir William’s family.

“Naming this piece of roads infrastructure after Sir William pays tribute to his legacy, for his service to his country, not only on the battle field as a decorated major general, but also for his civilian work before that to the development of roads and bridges in this area as an assistant inspector of roads in the 1880s.

“It is a fitting way to memorialise Sir William’s life, which was cut short at Gallipoli on May 18 in 1915.

“Now, those who stop off at the rest area will be able to read about him and learn of his contribution to our history.”

The Scottish-born Major-General Bridges served with the Australian Imperial Force but is also remembered as the founder of Duntroon Military College. His body was repatriated to Australia and is buried in the grounds of Duntroon as a mark of respect.

“As much as we today remember Sir William Bridges, I hope in honouring him we commemorate the service of all Australian servicemen and servicewomen who have fought for this country throughout history,” Mr Marshall said.

“This rest area is a small but important contribution so that future generations will remember the sacrifices made by our service personnel and their families.”