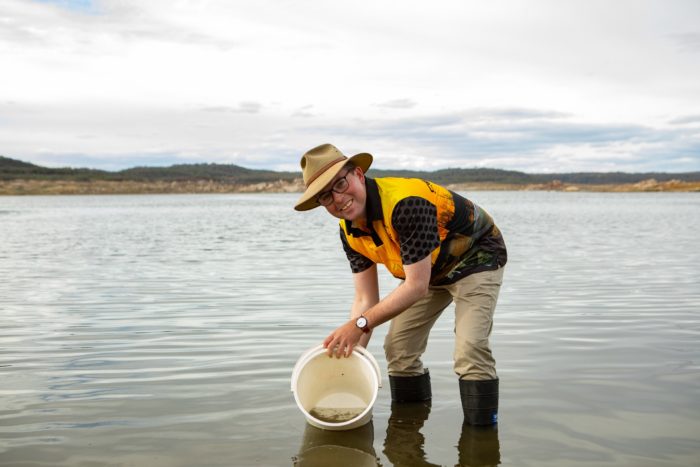 More than 25,000 Murray Cod fingerlings have been placed into Copeton Dam this week as part of the State Government’s ambitious plan to save the State’s native fish species, Minister for Agriculture and Member for Northern Tablelands Adam Marshall announced.

Mr Marshall was at Copeton Dam to help with the state-wide re-stocking operation, which will see 400,000 native fish stocked in waterways across NSW this month alone.

“Just before Christmas I was out at Menindee, returning more than 60,000 Murray Cod to the Darling River and it gives me great joy to see thousands more re-stocked into our iconic local waterways,” Mr Marshall said.

“Yesterday, we saw 25,000 fingerlings flourishing in the dam and next month we will see an even greater number returned to waterways between Copeton to Bingara and Gravesend to Moree.

“This is all part of the State Government’s largest-ever fish breeding program launched last year, when we created a modern day ‘Noah’s Ark’ to save our native species from deaths caused by record low inflows and rainfall and high temperatures.

“This is great news for fishers of course, and it will be an economic boost for the area as the fish population rebounds, but it will also give the wider community a real lift to think that our rivers are ready to support the recovery of these native species.”

Mr Marshall said the 25,000 fish had been bred from 15 Murray Cod rescued from the Namoi and Peel Rivers last year, along with other broodstock already at the State Government’s flagship hatchery at Narranderra.

“To have thousands of these juvenile fish being stocked back into the Copeton Dam another sign that the region is really beginning to bounce back from the drought,” he said.

“The 25,000 Murray Cod were bred in the NSW Government’s flagship fish hatchery at Narrandera, where they stayed until conditions improved – now is the right time to see them returned.

“DPI has done a phenomenal job in breeding these offspring. This program ensures our iconic fish species will always swim through waterways across the Northern Tablelands region and across NSW, no matter how severe future summers might be.”