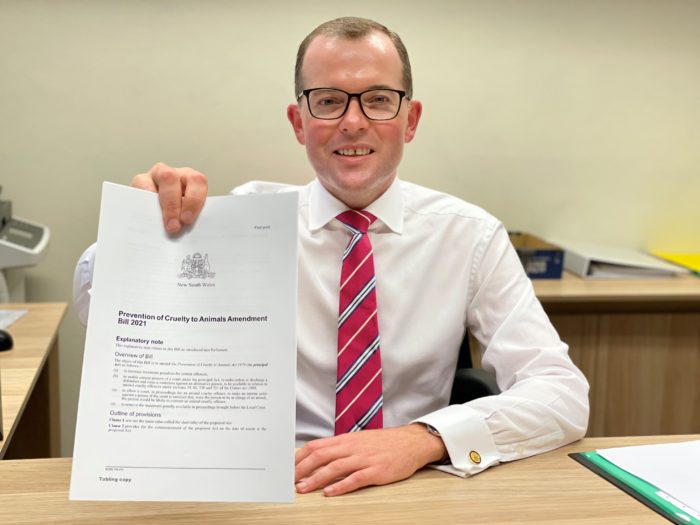 Yesterday, Mr Marshall delivered the second read of the Prevention of Cruelty to Animals Amendment Bill 2021 in State Parliament, which will dramatically increase penalties for and the range of tools available to courts to better and more effectively deal with animal welfare offences in NSW.

“We’re taking the next step in our crusade by boosting protections for animals across the State by powering forward with our introduction of Australia’s toughest suite of penalties for animal cruelty offences,” Mr Marshall said.

“These laws send a clear message to those who commit abhorrent acts on animals; if you do the wrong thing, you will face most severe consequences.

“The new set of measures dramatically increases both financial penalties and gaol time and ensures that the courts can prevent people found guilty of the worst animal cruelty offences from owning, caring for or breeding animals in NSW.

“Our enforcement agencies do a great job and this Bill will put in place the penalty regime NSW needs to effectively punish those who engage in one of the lowest acts imaginable.

“This Bill doesn’t create any new offences but makes sure penalties reflect the seriousness of animal welfare offences and to act as a clear deterrent to those grubs considering abusing animals, especially in disgusting puppy factories.”

Mr Marshall said the changes received strong support through community consultation in 2020 and therefore he hoped the bill would receive the same support in Parliament.

“The NSW Government has made it clear it abhors cruelty to animals and will not tolerate it,” Mr Marshall said.

The proposed increases would introduce the following penalties: