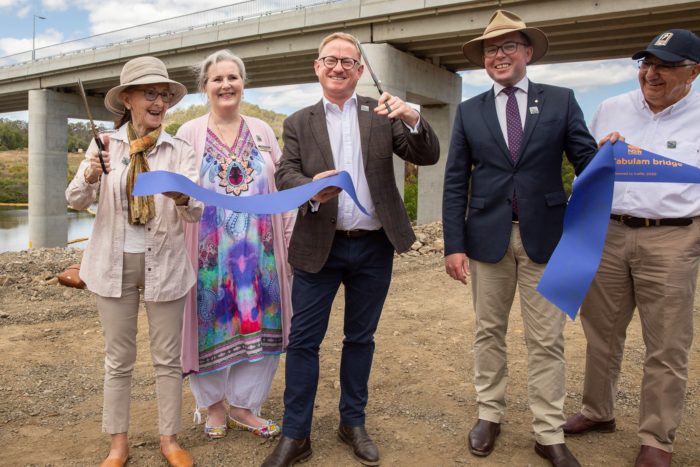 THE Tabulam community has officially welcomed the completion of the new $48 million bridge over the Clarence River, while farewelling the nearly 120-year-old former bridge, at a special opening and walkover ceremony yesterday.

Minister for Agriculture and Western NSW Adam Marshall, Duty MLC for Lismore Ben Franklin, local MP Janelle Saffin and the Mayors of Kyogle and Tenterfield Shires cut the ribbon on the new bridge as part of the NSW Government’s Bridges for the Bush program.

“The bridge is a significant connector between Kyogle and Tenterfield local government areas and plays an important role for freight connectivity by future-proofing the northern part of the state with a vital two lane east-west route.

“The project has also supported 40 full time jobs and 25 local suppliers and subcontractors which has been a much needed boost for the local economy during challenging times.”

Duty MLC for Lismore Ben Franklin said it was great to be able to honour the old bridge before it came down with a special walkover.

“Sadly the original bridge built in 1903 no longer meets the needs of road users and the community and it is not financially viable to maintain it for pedestrian access,” Mr Franklin said.

“That’s why we are inviting the local community to take one last walk across the bridge this weekend.

“We will also be working with Council, local museums and the school to potentially reuse some timber elements of the original bridge in local art and installations and other timber bridges to create a lasting legacy.”

Mr Marshall added the old bridge was historically significant as some of its builders were employed on a nearby cattle farm by Sir Harry Chauvel, who formed the famous Australian Light Horse.

“The old Tabulam Bridge also holds important cultural and sentimental value to the local Bundjalung people, the original custodians of the northern coastal area of NSW,” he said.

“As part of its legacy we will building a viewing area on the eastern bank of the Clarence River to commemorate the former bridge and recognise its importance to local Aboriginal communities and the formation of the Australian Light Horse.”

Transport for NSW is also working with the community to share their memories, paintings and photos of the old bridge in a commemorative e-book.

Community and stakeholders can make contributions to the commemorative project by emailing tabulambridge.community@georgiou.com.au or by calling 1800 314 530.