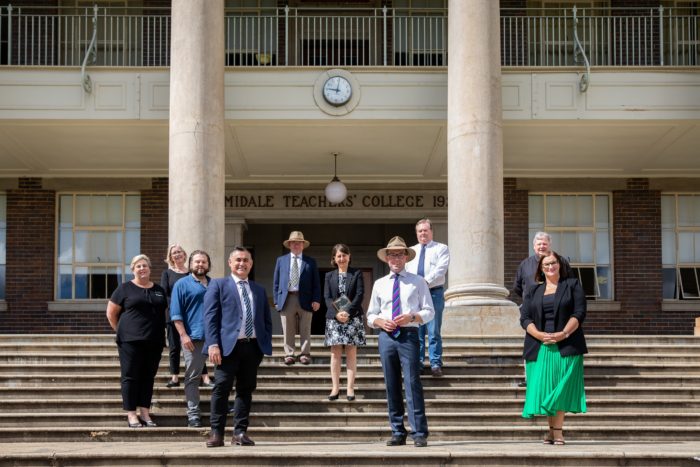 THE C.B. Newling Building, better known as the Old Armidale Teachers’ College, has been announced today as the new home of the Department of Regional NSW, bringing around 100 new full-time job to the city.

Member for Northern Tablelands Adam Marshall was joined by Premier Gladys Berejiklian, Deputy Premier John Barilaro and Minister for Education Sarah Mitchell today for the announcement, which will see the iconic Armidale building also house a range of other government agencies following a major revamp.

Mr Barilaro said $2 million would be spent on initial works to establish and prepare the State Heritage-listed building as one of four locations for the Department of Regional NSW.

“Regional communities have individual needs and unique challenges and with a rising number of businesses and people moving to the regions, it’s more important than ever that NSW Government staff have a significant presence in the bush,” Mr Barilaro said.

“More than three quarters of the department’s staff are already based in the regions, living and working in the communities they serve and these new jobs and the work created by the establishment of the new hub will provide a massive local economic boost.”

Mr Marshall welcomed the announcement, after strongly advocating for the Old Teacher’s College to become the Department’s new home since the middle of last year and said the location would provide plenty of office space, good access and great digital connectivity.

“Armidale’s business community has been buzzing since the department was formed and today’s announcement will give the region even more confidence that the NSW Government will deliver the services and infrastructure that we need,” Mr Marshall said.

“Around 100 new full-time and high-paying jobs will provide a huge shot in the arm to the local economy and community.

“This is the best possible outcome for the preservation of the heritage listed building, which has suffered for decades through lack of expenditure and maintenance – it will breathe new life into this grand old dame of the city.

“We will have staff based here who understand the issues affecting towns like Armidale and know the local challenges and benefits of regional life and they will be in a position to help deliver the support, infrastructure and programs that communities like ours need.”

Mr Marshall said the decision meant the historic Old Teacher’s College would receive much-needed maintenance and modern amenity upgrades it needed, while also ensuring it was preserved for future generations.

“The only tenant this grand old building has had since the University of New England walked away in 2018 has been the New England Conservatorium of Music and I am pleased that it will once again be put to good use and receive the attention it deserves,” Mr Marshall said.

“The best way to properly preserve a building of this ilk is to have it utilised and with a major government department based there, alongside the Conservatorium, there will be more impetus to not only keep the facility in working order, but also lift amenities up to the standard expected of a modern workplace.

“I cannot wait to see the improvement works get underway and welcome the new staff to our region.”