OPENING OF $121M ARMIDALE SECONDARY COLLEGE JUST ONE WEEK AWAY 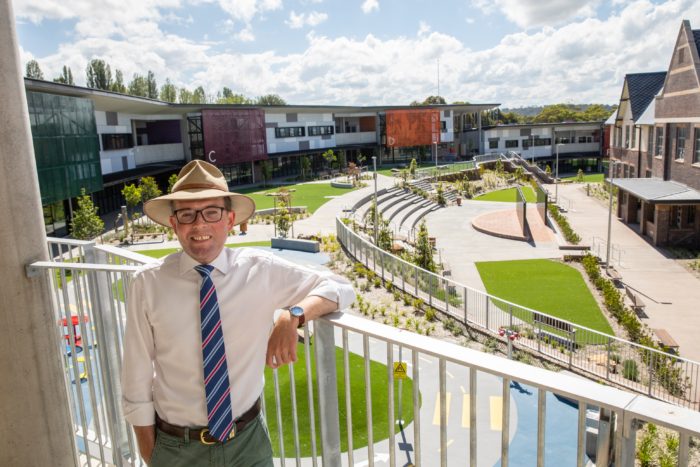 A NEW era is about to dawn for rural and regional public education, with Northern Tablelands MP Adam Marshall today commencing the countdown to the official opening of the revolutionary $121 million Armidale Secondary College.

An ecstatic Mr Marshall said the official opening next Friday (29 January) marked the realisation of the community’s dream for better educational outcomes for Armidale’s children.

Mr Marshall said such was the significance of the occasion and the new school that NSW Premier Gladys Berejiklian, Deputy Premier John Barilaro and Education Minister Sarah Mitchell had all confirmed their attendance for the auspicious event.

“How exciting to think next week 1,500 students will wake-up knowing they are about to embark on their educational journey, in one of the most state-of-the-art schools in NSW,” Mr Marshall said.

“There is absolutely no doubt, this is the premier school in NSW anywhere outside of Sydney, bar none.

“Delivered in time for Day 1, Term 1, the ribbon cutting will be a celebration of three years of hard work and planning by Armidale’s educational leaders, student body and community.

“More important than Armidale Secondary College being the largest investment in regional education in the State’s history, is the commitment it delivers to providing first-class public education to regional students, no matter their background.

“Hearing students compare the open plan classrooms, specialised science, industrial arts and hospitality spaces and new performing arts and sports facilities to a university campus shows the Government has listened and delivered on the wants of the community.

“To achieve this development has not been without sacrifice, and so the opening will also recognise the staff and students of the former Armidale and Duval High Schools, who have come together to make this institution possible.

“The re-purposed 98-year-old Armidale High School central building stands as a salute to the past, but with its new musical rehearsal space, specialised glass partitions and visual arts wet areas, it is also a symbol of new beginnings.

“I hope as students start classes for the first time they do so with the feeling their futures are safe with the highest quality education at their fingertips.”

Mr Marshall said construction and planning of two key final components of Armidale Secondary College were being finalised in the lead up to the opening.

“This week, the $3 million Ag-Hub building will be completed, with contractors Richard Crookes Construction officially handing the facility over to the Department of Education,” he said.

“This new agriculture centre, which will be available to all year groups, features high-tech wireless sensors that connect to a centralised computer, allowing students to analyse data across agriculture, primary industry and animal husbandry.

“One of the final section of the project to be completed is the standalone multipurpose hall.

“Planning approvals for the building, which will include a stage and retractable seating, performing spaces, change rooms and amenities, are still being finalised.

“Construction will take place this year with the project expected to complete early 2022.”