PALLY’S MOSQUITO CREEK ROAD ISSUES A SWAT AWAY FROM RESOLUTION 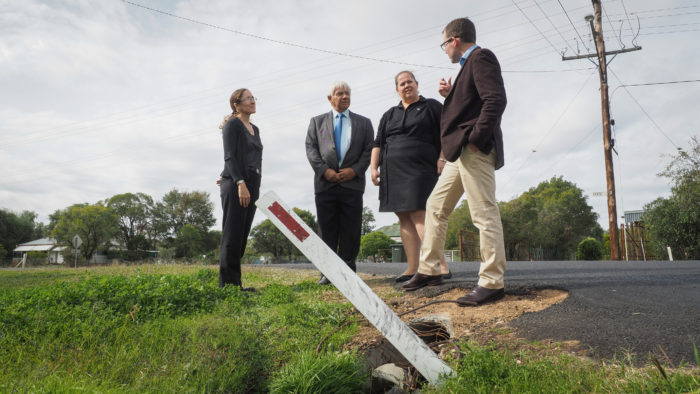 Mr Marshall said the $152,304 project to widen the intersection and modify nearby infrastructure was entering the final stages.

“By widening this intersection, producers will be able to take the most cost effective route from Croppa Creek and Pallamallawa, providing an important link to the Gwydir and Newell highways,” Mr Marshall said.

“These works, funded through the NSW Government’s Fixing Country Roads program, have allowed for a substantial widening of two intersections, as well as relocation of several troublesome culverts and power poles.

“Before construction, this intersection was too narrow to accommodate the large, sweeping turning circle of our region’s larger trucks – forcing them to take a much longer route, or make an illegal turn.

“Upon the completion of these works in September, AB-Triple trucks will officially be able to access the route. This will cut costs for our primary producers and improving the productivity of our agricultural and freight industries across the region.”

Works on Mosquito Creek Road included:
• widening two of its T-intersections
• sealing of a 90-degree bend on the north-eastern entrance into Pallamallawa
• replacement, widening, and headwall works on two culverts on nearby Parramellowa Street
• relocation of power poles to allow for additional width of road.

Mr Marshall said the intersection upgrade was one of 139 roads and bridges to have received funding through the Restart NSW Fixing Country Roads program to date.

“Each project will make it easier to move goods around the region, reducing the maintenance burden and fuel costs on freight operators and reducing overheads for primary producers.”