PASSING ON THE GOOD NEWS ABOUT NEWELL HIGHWAY UPGRADE WORKS 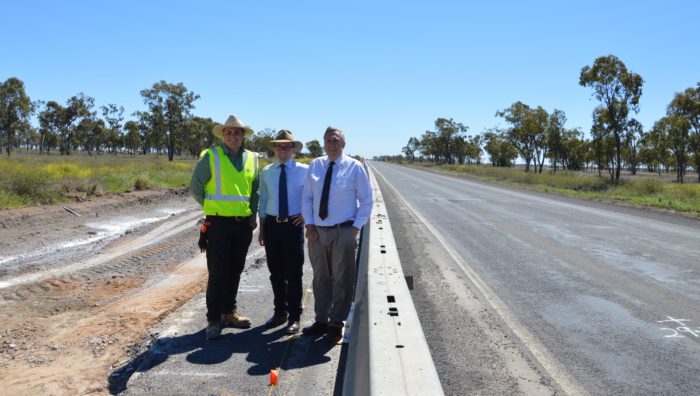 WORK is continuing and heading for completion on the new $3.6 million overtaking lane on the Newell Highway north of Moree.

The northbound passing lane is being constructed at Wallon Creek, 28 kilometres north of Moree, and is part of a $500 million Newell Highway upgrade program announced by the State Government last year as well as additional works.

Northern Tablelands MP Adam Marshall said the work was forecast to be completed in early December and is part of a $34 million project for some 17 new overtaking lanes along the length of the Newell Highway.

Mr Marshall inspected the progress recently, showing Roads Minister Duncan Gay just what was being achieved under the funding and the various work programs for the Newell.

“The Newell is the spine of country NSW carrying billions of dollars’ worth of commodities across country NSW and interstate each year and it is vital we continue improving this highway to increase safety and freight efficiency,” he said.

“Farms in the Moree district transport 160,000 tonnes of cotton and 130,000 tonnes of grain along Moree roads each year, so the upgrades are critical to the continued prosperity of our primary producers and the agricultural industries in this region.”

Mr Marshall said about three weeks of the Wallon Creek work had been lost to wet weather delays but no other problems had been encountered.

The project involves using concrete barriers to separate workers from traffic during construction to improve safety for workers on the site.

Since 2011, the Roads and Maritime Service has completed 12 new overtaking lanes on the Newell Highway with four more currently under construction, including that at Wallon Creek.

Mr Marshall said major other road works along the Newell were still in the planning stage, including new heavy duty road surfacing on the Newell, north of Moree.

The NSW and Commonwealth Governments were also jointly funding the $85 million upgrade of a 28-kilometre section of the Newell Highway between Mungle Back Creek and Boggabilla as part of a commitment to fast track upgrades to key freight routes in country NSW.