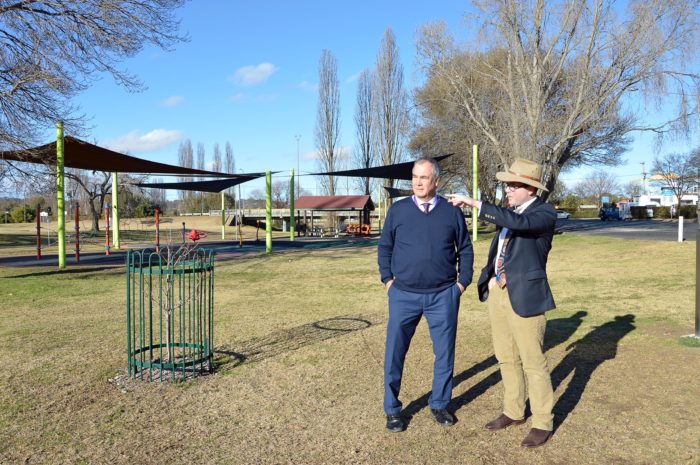 ARMIDALE’S Curtis Park is set for a million-dollar overhaul to attract more visitors if Northern Tablelands MP Adam Marshall and Armidale Regional Council have their way.

The local State MP is getting behind a plan by council to convert a section of Curtis Park into a ‘Regional Playground’ area complete with state-of-the-art play equipment and modern amenities.

“Parks are integral to regional communities and can make or break a town’s reputation with families,” Mr Marshall said.

“Having somewhere safe and engaging for children to play is a necessity and I was thrilled to see Armidale Regional Council develop this proposal for a ‘Super Park’ in the heart of the city.

“Many locals are familiar with the ‘Super Park’ in Tamworth on Kable Avenue – it is always packed as families and out of towners look for somewhere children of all ages can play safely and be entertained for hours.

“This park will embrace that concept and in fact dovetail with plans to revitalise the entire Creeklands area, creating a huge space that will become one of Armidale’s major community assets.

“The plans include dedicated play areas for toddlers, younger children and school aged children as well as a cable playzone, a sand and water zone, musical play equipment, a swing zone and an open area of parkland for ball sports – all securely fenced.

“The play equipment will be housed on close to 1,000m2 of soft fall and include multiple picnic areas and barbecues. A new amenity block will also be built that will be fully wheelchair accessible.

“Another key feature of the park will be the inclusion of play equipment that can be used by children of all abilities, including those in wheelchairs.

“The existing facilities at Curtis Park will be repurposed – the play equipment will be moved to a new location and the areas updated to house exercise equipment that can be used by locals to keep fit while enjoying the outdoors.

“This is an exciting project and has been the most requested development based on community feedback and I am determined to secure the $999,700 required from the State Government to build the Park.

Almost 20 per cent of the population in the Armidale Regional Council local government area is under 15 years of age and Armidale’s family-friendly and educational credentials make this an attractive place for families to move.

Armidale Regional Council Mayor Simon Murray said the development of a super playground similar to Tamworth was a popular request by families during previous consultations with the Armidale community.

“The super playground with a proposed location in Curtis Park will be a wonderful recreational asset for the Armidale region if we can secure the funding,” Cr Murray said.

“We expect families will come to Armidale from across the region to enjoy the space and spend quality time with their children.

“The super playground is a key feature of our proposed plans for the Creeklands precinct and it will be designed to provide a dynamic sensory outdoor space for children to enjoy.”