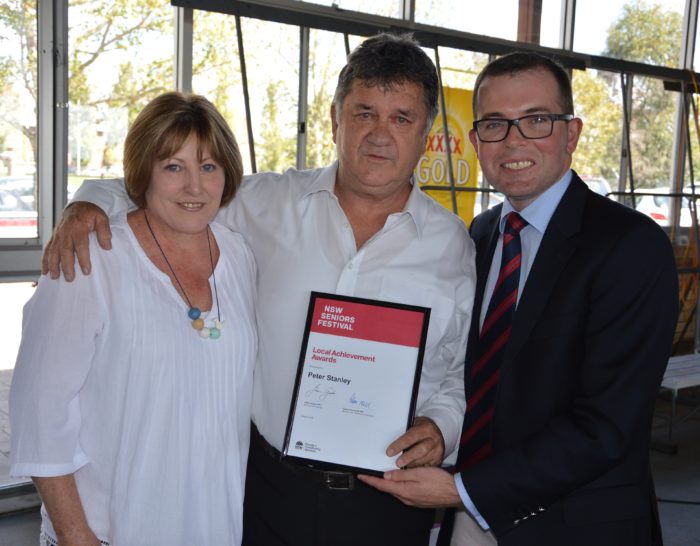 Mr Marshall made the presentation at the Seniors Week celebrations at the Armidale Racecourse last week.

“Peter is a well-known and respected musician and has received this award in recognition of the many years he has generously volunteered his time entertaining audiences at local community events,” Mr Marshall said.

“Peter first picked up a musical instrument at of the age of seven when his father gave him a harmonica for his birthday.

“He then went on to become bugler for his school band and after leaving Armidale at 19 for the bright lights of Sydney, joined his first band as singer/guitarist.

“Peter has many great tales of the bands he’s played in and the clubs he’s performed at and it’s this joy of entertaining and his desire to give back to his local community that has brought Peter to this point where is being honoured for his generosity of spirit.

“This award is the community’s way of saying ‘thank you’ to Peter for his enthusiasm and commitment to our local community.”

Mr Marshall said seniors deserved recognition for the significant contribution they made across many different areas of community life.

“I commend Peter on his generosity and thank him for the many years he has volunteered him time to entertain at community events. He is a thoroughly deserving recipient of this Local Achievement Award,” Mr Marshall said.

“This award also coincided with the NSW Seniors Festival, which celebrates and acknowledges the important role that seniors play in our local communities.”