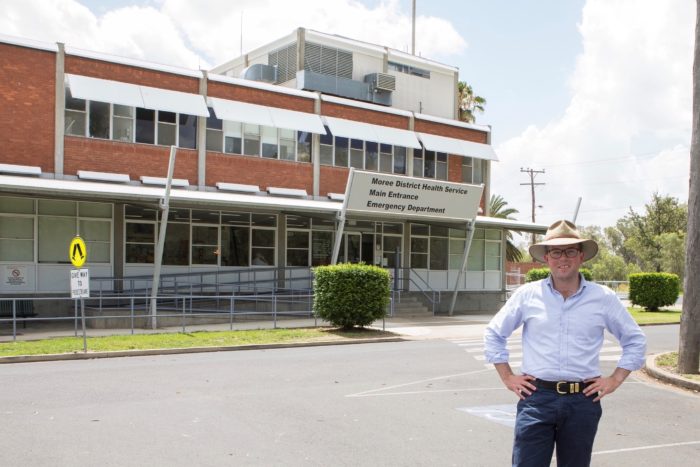 Northern Tablelands MP Adam Marshall is pleased that planning for both the Glen Innes and Moree Hospital redevelopments is on track.

MASTER plans for the $80 million Moree Hospital redevelopment and $20 million Glen Innes Hospital refurbishment are on track to be completed within the next six months, with Northern Tablelands MP Adam Marshall has announced, after last week receiving an update on progress from Hunter New England Health CEO Michael DiRienzo.

Mr Marshall said he was pleased the draft Clinical Services Plan (CPS) for Moree District Hospital would be completed by the end of the month, while Glen Innes District Hospital’s draft plan was now on the Health Minister’s desk, awaiting approval.

“The Clinical Services Plan is one of the most important parts of the hospital planning process, as it projects changing demographics in the community, the health needs of the population in the future and clearly details what services must be included in the new hospitals to meet those future and changing needs,” Mr Marshall said.

“Consultation on Moree Hospital’s plan took place with hospital staff, local GPs and Moree Plains Shire Council late last year and the draft is scheduled to be submitted to the Minister for his assessment by the end of March.

“On being signed off, architects will be appointed by NSW Health to undertake the final designs and master plan.

“In the meantime, using the $500,000 allocated in last November’s NSW mini budget, architects have now been engaged to start drawing up the master plans for Glen Innes Hospital, which is a process that should take around two months.

“Master planning will include the demolition of the old nurses quarters.

“The health district is expecting the designs will be finalised by the end of the calendar year, with construction commencing early next year.”

Mr Marshall said while planning had progressed, his work in lobbying for both projects was far from over.

“When the master plans are finalised we’ll know exactly how much each project will cost and whether there’s any variations to the already committed amounts, with the expectation a tranche of those funds will be available in next financial year’s budget,” he said.

“The fight to upgrade these hospitals has been led by the Moree and Glen Innes communities and so once the draft clinical services plans have been signed off by the Minister, I will be strongly encouraging him to make them public, so everyone can see exactly what services will be included in their brand new hospital facilities.

“The delivery of these projects must be done quickly, but also with the highest levels of consultation and transparency.

“I look forward to communicating these project’s milestones as they occur throughout the year.”