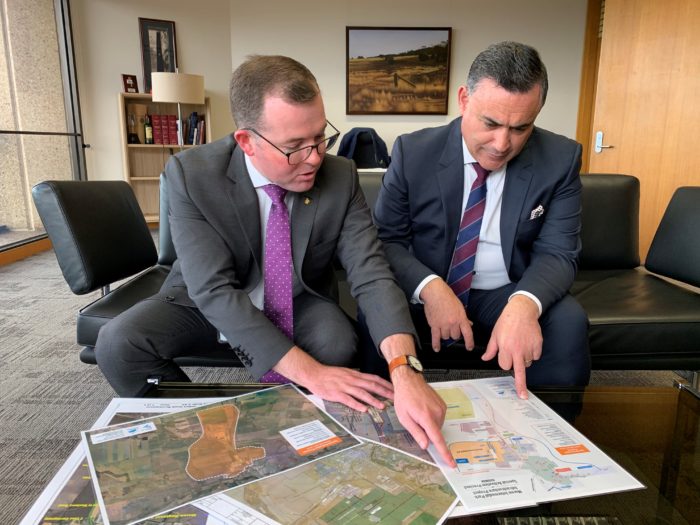 MOREE’S dream of becoming the regional freight hub for the North West is continuing to gain traction, with the State Government assessing an application from Moree Plains Shire Council for a $3.4 million grant to upgrade roads and access around a proposed Intermodal site.

Northern Tablelands MP Adam Marshall strongly backs the plans and has been lobbying Deputy Premier John Barilaro to secure the funds needed to kick-start the project.

“It is critical Moree have this infrastructure so it’s ready to capture the full benefits which will flow from the Inland Rail development,” Mr Marshall said.

“Being the most agricultural productive district in the country, Moree is perfectly positioned to have this large consolidation and loading facility to take produce from the region to Brisbane, Newcastle or further afield.

“This project is visionary but will also be an economic game-changer for the community.

“The Intermodal will ensure that all roads will lead to Moree and with it tens of millions of dollars’ worth of produce and new jobs created.”

Moree Plains Shire Council applied for the funds through the NSW Government’s Growing Local Economies Fund, with council pledging to contribute $205,000 and private enterprise investing $337,000 to the $3.9 million project.

“As a government I believe we need to ensure the roads, rail lines and services are in place and functioning, once the first train rolls along the Inland Rail, through Moree in 2025,” Mr Marshall said.

“I want this funding approved to allow a new section of road to be constructed between Tascott’s Road to Burrington Road, south of the Louis Dreyfus Company site as well as works to upgrade and flood proof unsealed roads along the Newell Highway and rail corridor.

“The proposed site for an intermodal terminal adjacent to the Moree’s existing industrial zoned land has the potential to be a central meeting point for the region’s freight, all that’s needed now is the roads and rail lines to connect that freight to the world.”

Mr Marshall said the intermodal would revolutionise economies across the North West.

“The Inland Rail is a once in a life time opportunity which will not only reduce freight costs for the agriculture sector but will create new markets for produce and new jobs in struggling regional communities.

“Moree Plains Shire Council has done the heavy lifting, putting together a comprehensive Shire-wide Transport and Intermodel Study, now I’m keeping the pressure on the State Government to do its bit in unlocking regional NSW’s true economic potential.”