PRAISE FOR COMMUNITY CARE AND CONTRIBUTION AT McMAUGH GARDENS 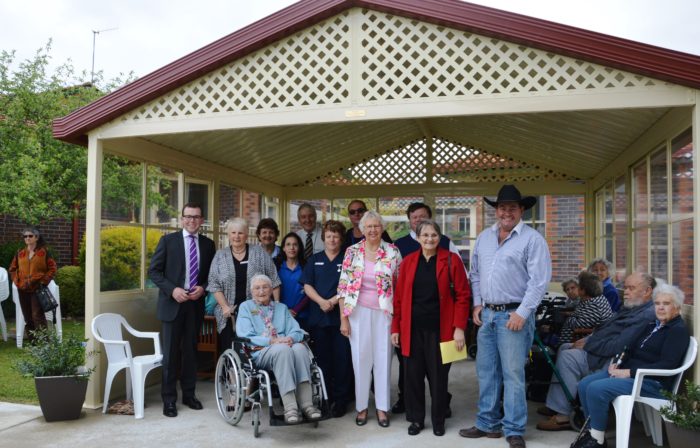 THE kind and committed community support across the Uralla community has been highlighted with the opening of another special place for sanctuary and reflection at the McMaugh Gardens aged care complex this week.

Northern Tablelands MP Adam Marshall said the opening of a new covered pergola area in the grounds of the Uralla aged care facility was another testament of the dedicated and caring community spirit for the aged care residents and the work the management did in providing such excellent amenities.

“You can never overestimate the value of the community contributions that go into something like McMaugh Gardens and the work done by so many, particularly volunteer, volunteer groups and other organisations in Uralla, to improve the facilities is enormous,” Mr Marshall said.

He was a guest, with many others, for the opening on Monday of the latest example of that spirit of caring for a facility that provides a 36-bed aged care complex.

The Friends of McMaugh Gardens paid tribute to a number of groups at the opening where Friends convenor Marj Gream recounted some of the colourful but valuable acts of kindness and generosity of some of their sponsors and special mates.

Uralla Deputy Mayor Robert Bell was another who praised the efforts of so many supporters.

Mrs Gream said the numbers of paths, the pergola, the seats and lifters for the enjoyment and comfort of the special people who called McMaugh Gardens their home was not beyond the dreams of the Friends group and that was evidenced by the roll call of people who had contributed again.

The pergola was officially opened – with the traditional unveiling of the plaque – by one of the longest serving members of the Friends, Eileen Elks, who is now also a resident.

“The spirit and the practical help and contributions we see with this organisation is the perfect example of country caring and it is that level of support that sets McMaugh and Uralla apart from many others, and particularly, way above what we so often see in cities,” Mr Marshall said.