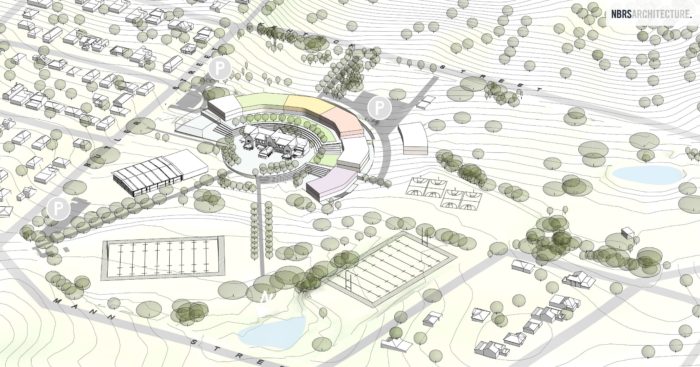 An early design render of the Armidale Future School.Thursday, 8 February 2018

EARLY design work for the new $65 million Armidale Future School has been revealed, with Member for Northern Tablelands Adam Marshall describing the preliminary sketches as a “tantalising glimpse” of the unprecedented education project.

“Armidale’s new $65 million future school will be the new standard of excellence for rural and regional education, offering an unprecedented breadth of courses in modern, world-class facilities and learning environment,” Mr Marshall said.

“This concept drawing is a very simple render, giving the community a sense of what to expect when the final plans are drawn up.

“Produced by NBRS Architecture, the bold design features a semicircle looking upon a central courtyard, offering all students a view of the beautiful existing school campus.

“This design honours the existing architecture, with newly constructed modern facilities to best reflect the new approach to teaching within.”

Mr Marshall said the designs were subject to change, with the community now having its say.

“While most of the design details are still on the drawing board, this week’s information sessions have proved instrumental in filling in the blanks and guiding the final design of the buildings,” Mr Marshall said.

“I’m tremendously excited for this project, not only as a record $65 million investment in country education, but as a new school that is substantially shaped by the community.

“By engaging with the community over a year before breaking ground, NSW School Infrastructure can ensure that all aspects of the Armidale Future School best meet the expectations of parents, students and our region.

“Getting this right is a must and a recent NSW Government review shows that sharing spaces with the community has wide-ranging benefits,” Mr Marshall said.

“It not only improves the quality of facilities to all, but also boosts social cohesion, student engagement and the sense of community ownership.”