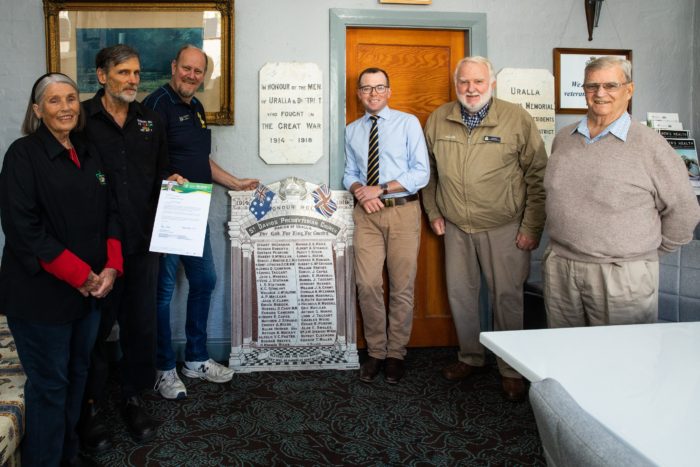 THE State Government has joined a successful community campaign which secured an important piece of Uralla’s military history, Member for Northern Tablelands Adam Marshall announced today, presenting a $4,189 cheque to the Uralla RSL Sub-branch to cover the purchase of a one-of-a-kind marble World War 1 honour roll.

Mr Marshall wrote to Premier Gladys Berejiklian last month requesting funds to assist the local Sub-branch in the purchase and transport of the St David’s Presbyterian Church honour roll, which was bought at a military auction in Toowoomba.

A number of items including the honour roll were sold in 2013, after they were loaned to a museum from St David’s Church.

Mr Marshall said it was a privilege to support the Uralla community in bringing the priceless piece of history home.

“Locating, purchasing and returning the honour roll to its home here in Uralla has taken military-like planning and execution from all involved,” Mr Marshall said.

“Just prior to the auction at Toowoomba, Ann Edwards from the Uralla Historical Society and Jim Swales, whose father’s name is on the honour roll, approached me for support in securing the item when it went to sale.

“The marble honour roll with coloured etching lists the names of more than 50 Uralla servicemen who fought in the Great War.

“Like me, the Premier recognised the historic significance of the honour roll to the region and has provided funds to reimburse Uralla RSL Sub-branch for its purchase and freight cost.

“Through the efforts of the Uralla Historical Society and RSL Sub-branch President Russ French, this important piece of local history is back where it belongs and will be proudly displayed in the RSL rooms for generations to enjoy.”

Mr Marshall added the next stage of the operation was to search for a missing wooden plaque, which displayed the photos of those names are listed on the marble honour roll.

“This search is far from over with the hunt now on for an accompanying photo board which was also sold at auction,” he said.

“Ann Edwards and Jim Swales are working with the team from McCrossin’s Mill to track the board down, with the hope of securing and mounting it alongside the marble memorial.

“By the State Government covering the cost of the honour roll, funds which were pledged by the community for its purchase will be used to buy back that photo board and another memorial once they are found.”