PRINTING WORKSHOPS TO PRESS AHEAD AT NEW ENGLAND ART MUSEUM 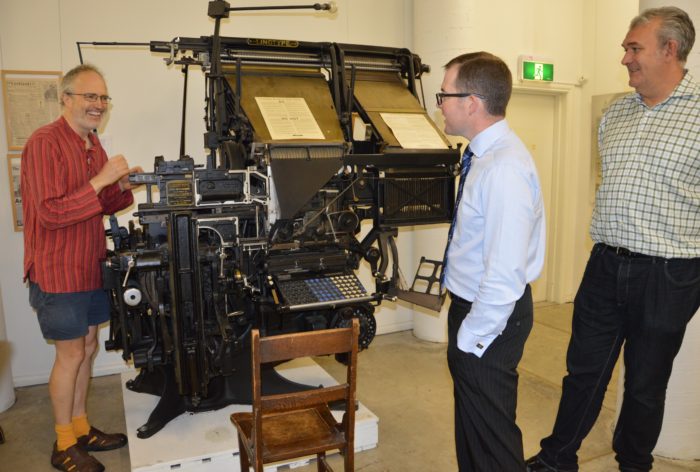 THE Museum of Printing at Armidale’s New England Regional Art Museum (NERAM) will host a special artist-in-residence project in April, thanks to a $3,000 grant from the State Government, Member for Northern Tablelands Adam Marshall announced today.

Mr Marshall visited the museum recently to deliver the good news and discuss the plans for the workshops with museum curator Dr Ben Thorn and NERAM Director Robert Heather.

Mr Marshall said a major resurgence of interest in letterpress printing in Australia had prompted Dr Thorn to apply for the funding. He was delighted the workshops would give locals an opportunity to find out more about the history and practice of letterpress printing.

“The museum is a treasure trove of old printing presses and these workshops will be give participants the chance to get their hands dirty and learn more about the craftsmanship and skills of the traditional print press artisans and designers,” Mr Marshall said.

“The letterpress artist Caren Florance will spend a week as artist in residence at the Museum of Printing in April and as she is the Ieading authority in Australia in the art of letterpress, I’m sure the workshops will be very well received.”

Mr Heather said the community was very fortunate to have the wonderful F.T. Wimble and Co. Collection of printmaking equipment, type and books in the Museum of Printing.

“This is one of the largest collections of its type in Australia so there is a unique opportunity to position Armidale as a local leader of the renaissance of this artform,” Mr Heather said.

“Letterpress is the traditional printing process used to make newspapers, books, pamphlets and posters and with a resurgence of interest in the process, artists, designers and craftspeople around the world want to get back to the old ways of making beautiful things.

“Caren Florance has been printing with letterpress for over twenty years, working with writers and artists on projects ranging from zines and stickers to books and posters, and even installation work so we are looking forward to welcoming her to Armidale.”

Mr Marshall also announced a $1,800 grant for the New England Bach Festival to stage a Baroque Bar event at an Armidale hotel during the festival.

“The baroque bar will feature three, late-night, free informal performances of baroque music at one of the local pubs and will give visiting musicians, local professionals and students an opportunity to play together,” Mr Marshall said.