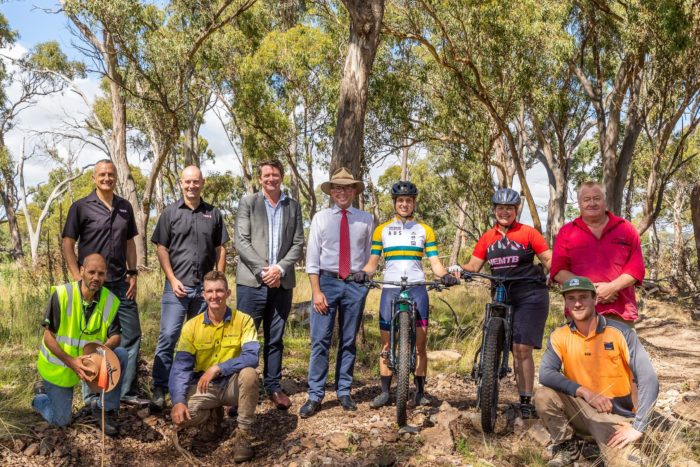 Armidale Regional Council received the funding in 2018, through round 2 of the NSW Stronger Country Communities Fund.

Mr Marshall said the club had faced an uphill battle getting work started on ‘Project Gonzo’ but the finish line was now in sight.

“Local mountain bike riders are just weeks away from having a world-class competition track in their own backyard,” Mr Marshall said.

“The addition of this circuit extends the original beginners trail, known as ‘Kermit’, by 50 per cent – taking the entire run to a whopping 13.5 kilometres.

“Specialist mountain bike trail construction company Dirt Art from Tasmania did the majority of earthworks, which were finished late February.

“The final stage of the project is now underway and includes fencing crossings and installing directional and pedestrian signage.

“In a boost to community infrastructure the general public will have free access to the track, with half of the new trail designed to cater for adaptive cyclists, kids and families, while the remaining half is rated blue or intermediate.

“Towns around Australia, particularly in Tasmania, have created entire local economies based on mountain biking and I think this project will really push Armidale’s reputation as an international leader in the sport.”

NEMTB President James Harris said the first official event on the course would be in April.

“The first opportunity the community will have to take on Gonzo will be the hugely popular UNE Life 12 Hours in the Piney on 2 April 2022,” Mr Harris said.

“This 12-hour team and solo event will be a huge test for the surface, as we are expecting over 250 competitors on course over the day.

“However, the main event we are preparing for is the WEMBO World 24 Hour Solo Mountain Bike Championships in November 2023.

“NEMTB has been able to renegotiate to host the race, after two consecutive postponements, and this new trail is an integral part of being granted the hosting rights to this world championship event.

“If WEMBO comes off successfully, like Gonzo out of a cannon, the sky really is the limit for the national and international events Armidale could find itself hosting in the future.

“Our club has been waiting for this project to be complete for more than two years now, and we are really looking forward to getting out on the course and putting it through its paces.”

“We’re incredibly lucky to have Project Gonzo to entertain cyclists enthusiasts both locally and from outside the region,” Cr Galletly said.