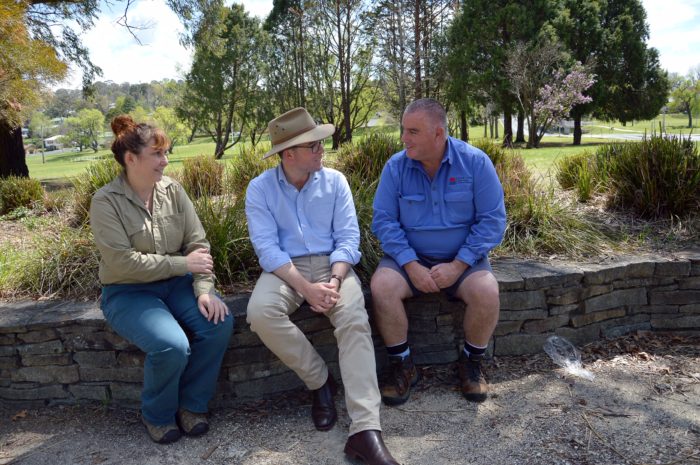 NORTHERN Tablelands MP Adam Marshall has announced a $67,717 conservation grant from the NSW Government that will help save four endangered small plant species across the region.

Mr Marshall said the funding was a big effort to save small species that were an important part of the local ecosystem.

Mr Marshall was at the Judith White Garden, on the corner of Faulkner and Dumaresq Streets, in Armidale today to meet with Lia Hooper, NSW Office of Environment and Heritage (OEH) Project Officer for Threatened Species and Saving our Species and Local Landcare Service senior field officer Guy Walker to discuss the tablelands program.

Mr Marshall said the endangered Small Snake Orchid, which is native to the Northern Tablelands, is one of the four rare species funded for conservation works by the NSW OEH under the Saving Our Species program.

The others are the Northern Blue Box, Wallangarra White Gum and Blackbutt Candelbark.

“These little-known species may sound insignificant to many people but they form an important part of our Northern Tablelands ecosystem,” Mr Marshall said.

“If they disappear, they can potentially cause other problems or changes in our landscape.”

The range of these four species is from Tenterfield in the north, down through Glen Innes, and south to the Armidale region, east to Dorrigo and west to Inverell.

“These are just four of more than 1,000 plant and animal species in the State that are at risk of extinction in the wild,” Mr Marshall said.

“These species have an important function in the Northern Tablelands environment so we need to invest money to ensure their continued long-term survival in the wild.

“This way we will continue to have a diverse range of plants and animals for future generations.”

The bright yellow-flowered Small Snake Orchid (Diuris pedunculata), which is in flower now, is less than 10 centimetres tall and was originally found from the Hawkesbury River to Tenterfield. It is now restricted to the area around Armidale, Uralla, Guyra and Ebor.

It is at risk from clearing, grazing, weeds, feral pigs, frequent fire and illegal collection from the wild.

Endangered populations of the Northern Blue Box (Eucalyptus magificata), are found only in a few widely dispersed populations around Hillgrove and the Glen Innes and Tenterfield regions. One population exists in the Oxley Wild Rivers National Park and the remainder occur on travelling stock routes or private property.

Clearing, firewood collection, grazing and dieback are its major threats.

Both these species are listed as vulnerable to extinction by NSW Biodiversity Conservation legislation.

Mr Marshall said the funding allowed for targeted revegetation and habitat restoration works, weeding and monitoring of ongoing threats, as well as education and community engagement activities to promote the program to be supported by the local LLS.

“Northern Tablelands Local Land Services provided in-kind support throughout the project as many of the sites in the project occur on travelling Stock Reserves,” Mr Marshall said.