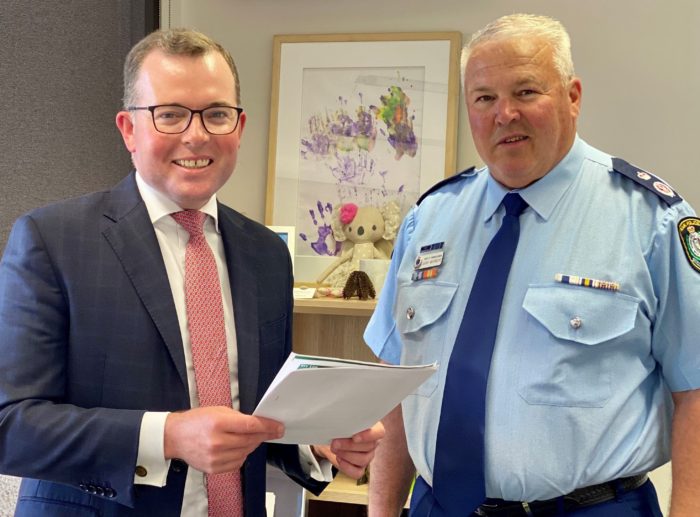 Northern Tablelands MP Adam Marshall, left, met with NSW Police Deputy Commissioner Gary Worboys to receive an update on the recruitment of a dog handler for the New England Police District, based at Inverell.

THE recruitment and placement of the region’s first-ever permanent NSW Police Dog Unit is imminent, according to Northern Tablelands MP Adam Marshall, who yesterday met with Police Deputy Commissioner Gary Worboys to have the deployment fast-tracked.

Mr Marshall said the meeting was “incredibly constructive and positive” with assurances the recruitment of the Police Dog Handler and trained dogs could would likely occur within weeks.

“This is incredibly positive news for the local community and our hard-working and dedicated men and women in blue right across the region,” Mr Marshall said.

“I’ll keep the pressure on to ensure we have a result and a public announcement as soon as the ink is dry on the recruitment paperwork and we have an officer lined up with a start date in the region.

“In 2018, when the designs were being drawn up for the new Inverell Police Station I expressly asked for provisions to be made for a Police Dog Unit, which would support officers across this region

“The New England Police District has never had a dedicated dog unit based here and it’s about time we had one to boost policing in the region and the capability of our men and women in blue to keep the community safe.

“I believe the addition of a police dog, based at Inverell, would be invaluable in acting as a deterrent for crimes like theft and break-and-enter, while also aiding police with searching for missing people and reducing drug and firearm related crimes.

“While the unit will be based in Inverell, it will be an extraordinary resource, which would be available for police in every community across the Northern Tablelands – from Mungindi to Ebor and up to Tenterfield.”

Mr Marshall secured a commitment for the Dog Unit from Police Commissioner Mick Fuller during his visit to Inverell in August this year.

“The Commissioner has kept his word, with the recruitment process starting almost immediately and now we’re almost there,” he said.

“I cannot wait to share the good news with the community shortly and welcome the new officer and the police dogs.”

Currently, the nearest dog unit is based in Coffs Harbour and is not easy to get across to the region, due to operational and workload considerations.