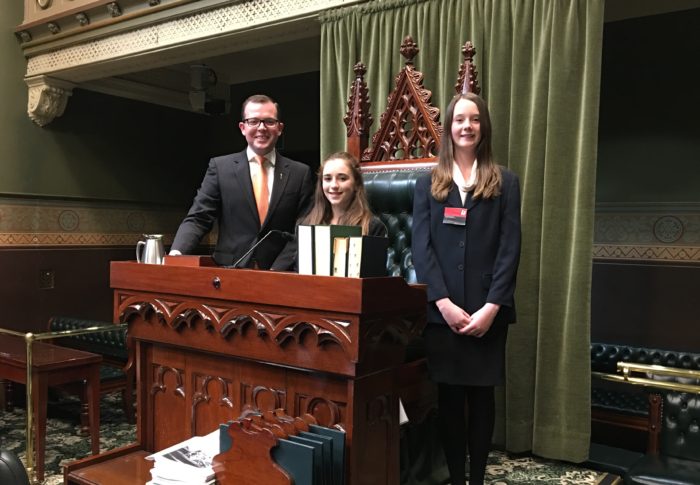 TWO Northern Tablelands high school students are experiencing life as MPs this week as they make themselves at home in Sydney’s Macquarie Street for the 2016 YMCA Junior Parliament.

Member for Northern Tablelands Adam Marshall was on hand to meet the Junior MPs – Caitlin Schuman (Armidale High School) and Gemma Weguelin (Uralla Central School) – during a session of the Junior Parliament today.

The first Youth Parliament alumnus to be elected to the NSW Parliament, Mr Marshall chaired debate on an Education Bill in the Legislative Assembly and addressed members about the life of an MP and how to get involved in leadership roles in the local community.

“I was proud to meet Caitlin and Gemma and watch them make some very considered, passionate and mature contributions to the debates in the House – they were outstanding advocates for country NSW,” Mr Marshall said.

“It was a real pleasure to attend today’s sitting of the Junior Parliament and see our two Northern Tablelands representatives and their peers debating important issues with great gusto in the ‘bear pit’ such as mental health classes for school students, changing the role of school welfare counsellors and the banning of aerosol cans. They certainly did us proud.”

Returning for her second year in the Junior Parliament, Caitlin was elected Deputy Premier and Minister for Health by her peers.

“This is a terrific initiative and I encourage any young people interested in youth leadership and governance to consider applying for the 2017 Junior and Youth Parliaments,” Mr Marshall said.