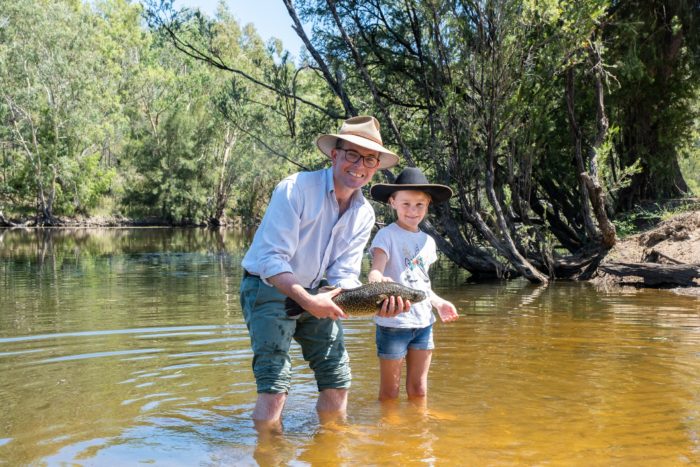 Member for Northern Tablelands and Minister for Agriculture Adam Marshall, assisted by 7-year-old Elle Moore, releasing one of the 16 returning mature Murray Cod into the Gwydir River at Bingara this week.

SIXTEEN rescued Murray Cod, which played a vital role in the State Government’s largest-ever native fish breeding and restocking program, were returned to their home waterway this week, with Northern Tablelands MP and Minister for Agriculture Adam Marshall releasing the fish into the Gwydir River at Bingara.

Mr Marshall assisted with the release of the fish, which he said were rescued during the drought to ensure there was enough genetic diversity in the government’s ambitious plan to launch a modern day ‘Noah’s Ark’.

“They won’t ever know it, but these 16 mature Murray Cod were crucial in ensuring our waterways remained fully stocked with healthy native fish,” Mr Marshall said.

“Two years ago, with the help of the Bingara Fishing Club, they were rescued from the river during the drought when the State Government embarked on the largest ever fish breeding program in the history of NSW.

“Now, they’ve come home to swim, after successfully completing their mission to repopulate waterways across the State.

“Rain has fallen and conditions in the Gwydir River have improved to the point where we can be sure this iconic native species will flourish in their return from the NSW Government’s flagship hatchery at Narrandera where they have been held since being rescued.

“Our local anglers are very excited to see these big fish returned to the river, and today’s release provides a major boost for the recreational fishing community.”

The release into the Gwydir River caps off what had been a wonderful week for the local fishing community, after Mr Marshall announced a $174,905 State Government grant to redevelop the community-run Bingara Fish Hatchery last week.

“It is critical we support our local recreational fishing community and clubs,” he said.

“They’re a passionate bunch and I’m proud to see that enthusiasm rewarded with new fantastic opportunities.

“As part of our $10 million Fish Rescue Strategy we are able to breed around 2.5 million native fish species each year, which have already started being returned to waterways throughout NSW.

“It’s been a tough last few years, but as conditions improve, this is a great time to get out and enjoy some of the best freshwater fishing available across the country.”