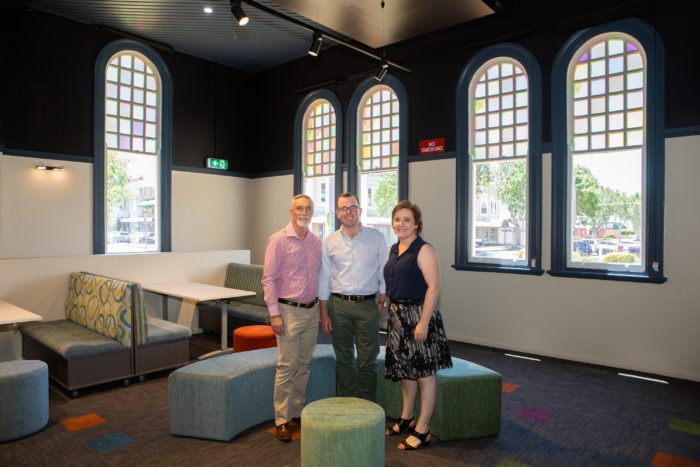 The State Government contributed $26,440.47 to the project through its Regional Cultural Fund which was matched dollar-for-dollar by Inverell Shire Council.

Mr Marshall said the once dark and dated space has now become the heart of art in Inverell.

“Up until this year the annex was under-utilised and lacked the resources to be used by local groups,” Mr Marshall said.

“This is no longer the case with the 12 by 7 metre room at the Otho Street end of the Town Hall fully revitalised with new flooring, upgraded power and lighting, modern modular furniture and internet access making it the perfect place to host small functions.

“When the Town Hall was built in 1905 the annex was the centre of public life with the room the headquarters of the Inverell Municipal Council and public library.

“It was a room with so much potential and I congratulate Inverell Shire Council for giving the space a new lease on life.”

Mr Marshall said the updated layout of the annex had also created a new ‘pop gallery’ for town.

“The Town Hall is one of the most popular and intimate places to host arts or cultural events in Inverell,” he said.

“Alongside the new fixtures it is also equipped with hanging space, modular exhibition panels and a projector screen which makes it the perfect venue for small scale art exhibits.

“With the capacity to seat up to 70 people, council will also market the annex as a space where business can host seminars and business workshops.

“Council has found many small groups have been looking for a space that could cater to 30-40 people which is exactly what the annex now delivers.”