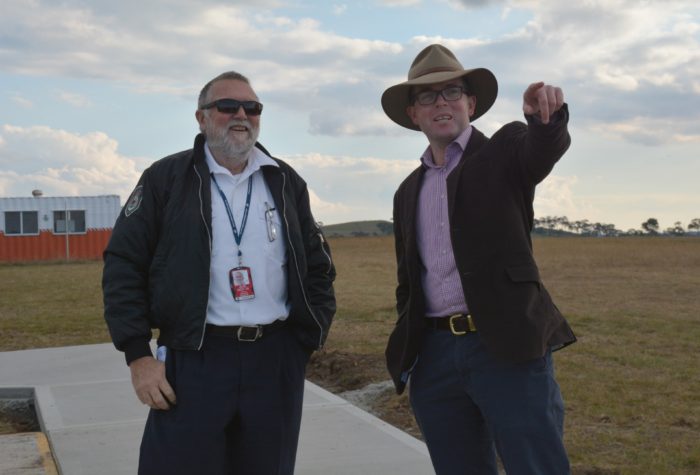 THE once primitive aerial firefighting facilities for the region, replaced late last year with a modern purpose-built airbase, has now had the finishing touches added to it, according to Northern Tablelands MP Adam Marshall.

Over the weekend a new 250,000 litre water tank was installed to increase the airbase’s water capacity at peak periods, which will be followed by the placement of another 20,000 litre tank to store ready mixed fire retardant, giving the NSW Rural Fire Service a total holding of 80,000 litres of fire retardant onsite.

Mr Marshall said he was delighted that these ‘basic’ conditions were now in the past.

“All up, almost $1 million has been invested to provide the most modern and well-equipped aerial firefighting facility here to protect the region,” Mr Marshall said

“Firefighters and pilots have been making do with some very primitive facilities, running aerial firefighting efforts from shipping containers and portaloos at the airport.

“Conditions during peak season are quite hot and incredibly busy and there’s been no place for the pilots or volunteers to rest and if they do get flame retardant on them there has been no showers or a place to change their protective gear.

“That’s why this project has been such a priority – to be able to offer our volunteers these basic comforts when they do get a break and to provide the best technical support for aerial firefighting operations in our region.”

Mr Marshall said the new airbase had a fully equipped command centre where all aerial operations will be co-ordinated, a tanker bay, storage rooms, showers, toilets, workshop and a crew room where volunteers and pilots can rest during a busy fire season.

“It’s a vast improvement on what was here previously and an investment worthy of the professionalism and efforts of the RFS volunteers and the pilots who do a tremendous job on the ground,” he said.

During the local fire season’s peak, between October to December, fire crews can battle around 460 fires in the region, with up to 35 fire fighters at the airbase base at any time.

Three seasons ago, aerial operations from the airport alone cost $4 million, with close to 4,000 operation hours clocked up by the airbase.

“The terrain of our region makes aerial water bombing a necessary tool for the RFS while it also helps take the heat out of the flames for the ground crews,” Mr Marshall said.

Mr Marshall said the Airbase opening was a first step towards plans to relocate the New England RFS Zone headquarters from Mann Street to the airport.

“The next stage is to construct a new logistics building next to the airbase and then the new headquarters following that,” he said.

“This is an important project that I’ll continue to work closely with the RFS and the government to make a reality.”