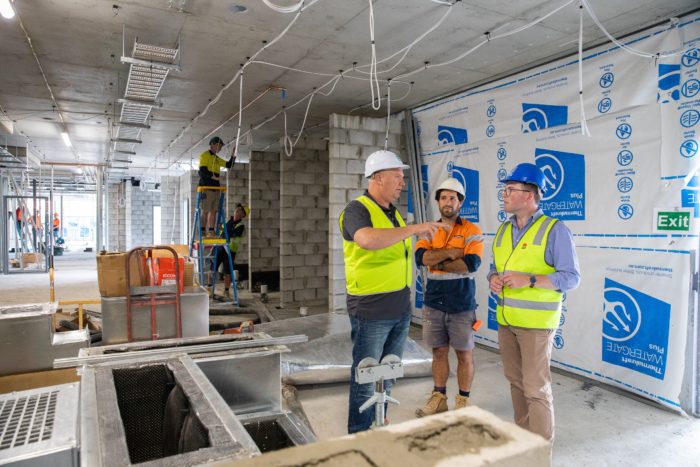 Rapid progress is being made on the construction of the new 24-hour Inverell Police Station, with Northern Tablelands MP Adam Marshall last week inspecting the two-storey building’s internal works and almost completed roof.

Mr Marshall said the $16 million development marked a new era for policing and community safety in the Inverell district.

“For the last three years I have talked constantly about the vast scope of this building which will house more than 50 officers once complete,” Mr Marshall said.

“Now, with the frame up and roof on, the community can see for itself the true scale of this state-of-the-art police station.

“It was great to be able to see the internal layout starting to take shape, in particular for the custody area, where the blockwork is almost finished with only a few sections left to do.

“The main roof is expected to be finished by the end of this month, with the sheeting of the auxiliary structures to then follow.

“The majority of the mechanical plant in the ceilings is in place on both the ground floor and level 1, along with hundreds of metres of wiring which is now snaking its way throughout the building.

“Work on the wall and ceiling framing has started, with external window fitting and thermal insulation nearly done.

“Outside, concreters are hard at it laying footpaths, which will provide access to the building from Otho Street.

“On any given day there is between 30 to 40 tradespeople onsite allowing work to charge ahead and, so I’ve been told, providing a boost to Inverell’s hospitality sector.”

“Unlike the old station where staff had to fight for a space to work each day, the beauty of the new facility is that it has been designed with the room to flexibly cater for changing needs of the force,” Mr Marshall said.

“Before the build is even complete we are seeing the benefits of the additional room, with New England Police already setting aside an office for the Dog Squad officer which will soon be calling Inverell home.

“I’m so pleased with the progress which is being made on the project and am confident our local officers won’t be far away from moving in come early next year.”