RUTH RECOGNISED FOR A QUARTER CENTURY OF COMMUNITY SERVICE 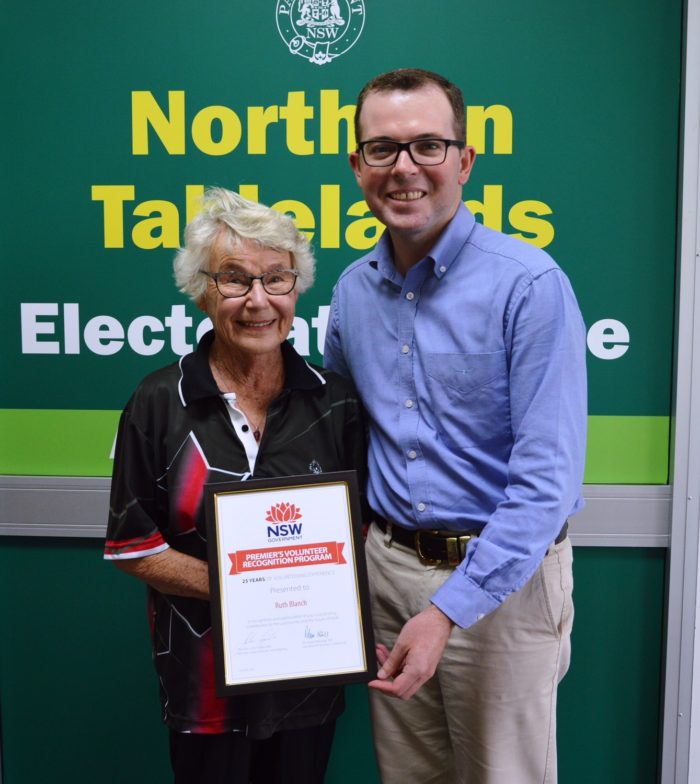 Member for Northern Tablelands Adam Marshall recently presented Ruth with the Premier’s Volunteer Award, celebrating 25 years of volunteering experience for a myriad of community groups across the region.

Since moving to Armidale, Ruth has contributed to several organisations, including the NSW Country Women’s Association, Red Cross, Meals on Wheels, church groups and the region’s Special Olympics club.

Paying tribute to Ruth, Mr Marshall said volunteering was more than just a past-time for her .

“Volunteering is essential to help out the communities and less fortunate people of the region. To put the community before yourself is a selfless act – but to continue for over a quarter of a century is nothing short of extraordinary,” Mr Marshall said.

“Through her constant work – Ruth has shown her dedication to helping make Armidale a better place to live for all and she’s a wonderful inspiration to many around her. It’s great for that service to be recognised through the Premier’s Volunteer Recognition Program”

Ruth’s son Greg is a capable sportsperson with Down syndrome. When the Special Olympics arrived in the region, she knew she had to get involved.

“He’s quite elite at sport, good at swimming. It was on a personal level that I started – but to see the joy and sense of success that it brings to people with a disability – it just makes it so worthwhile,” Mrs Blanch said.

“In one of the first athletics carnivals I went to in Sydney, a primary school kid fell over and the boy who was winning picked him up – they went on to run the race together. I think that captures the happiness and spirit of the games”

Ruth has served on the Special Olympics committee for the majority of the 25 years – and is now working as a public speaking mentor to help athletes with an intellectual disability share their stories with schools. With her assistance, the Ambassador Leadership Program has grown to six athletes.

Across that same time, she’s also served on the CWA committee, working on fundraising and organising community events.

Ruth says after a quarter of a century, she’s taking a back seat, but will continue to help where she can.