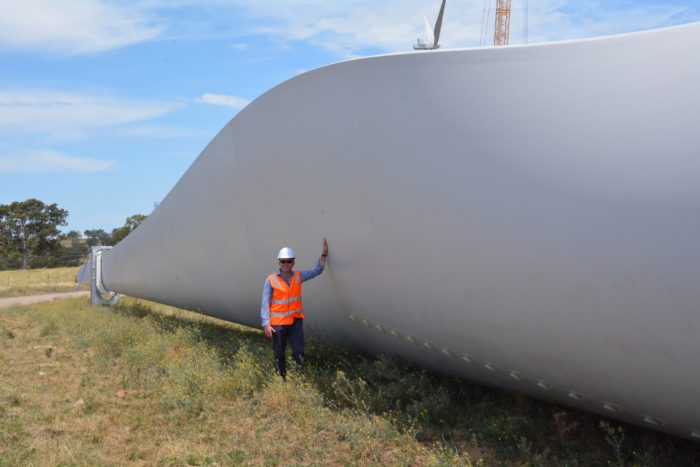 THE skyline between Glen Innes and Inverell is now dotted with large cranes, new wind turbines and testing towers, as progress on the region’s second windfarm, and the State’s largest, hits fever pitch.

This week Member for Northern Tablelands Adam Marshall visited the sprawling Sapphire Windfarm site in the Kings Plains district, climbing through the high-tech turbine hubs and seeing first-hand progress since his last visit.

With all 75 foundations poured and almost half of the pylons now ascending piece by piece, Mr Marshall said the progress was now becoming increasingly visible.

“All the groundwork has been laid, and now the exciting parts of construction are beginning to take place,” Mr Marshall said.

“Last time I visited the Sapphire Windfarm crews were busy pouring hundreds of tonnes of concrete, hanging thousands of kilometres of power lines and organising dozens of component shipments from Newcastle.

“Now the project is picking up pace, with Australia’s first two 500-tonne cranes lifting up a new tower section every half hour.

“Just eight months ago I stood 10 metres below the ground atop the newly completed foundation of Turbine 26. Now construction soars 50 metres into the sky and I can’t wait to come back in a few weeks to see it completed.”

Mr Marshall said he continued to be impressed by the logistical undertaking of building megastructures “off the beaten track”.

“Locals have no doubt seen many freight trucks snaking their way up the New England Highway, with each turbine requiring 10 truckloads of components before it’s completed.

“The build is moving like a well-oiled machine, with each of the 162 workers and contractors an essential component,” Mr Marshall said.

“Whether they’re preparing towers, carefully lifting 70 metre blade sections or wiring the on-site substation, each worker is putting money back into the local economy.

“When all 75 turbines are completed in August this year, the Sapphire Wind Farm will generate enough electricity to power 115,000 homes each year.”

Standing beneath one of nine completed turbines, the local MP said the 200-metre high generators gave a “sense of wonder” to renewable energy.

“These structures are an incredible blend of form and function and I’m proud to see them rapidly appearing across our region’s skyline,” he said.

“Soon, the Northern Tablelands will become a net exporter of energy for the first time in its history, producing more than 1.5 gigawatts of electricity to turn on the lights at homes and businesses right across NSW.

“As a longstanding supporter of renewable energy, I’m very glad to see our region in the driving seat for Australia’s energy future – putting us on the map while claiming millions of dollars in local investment.”