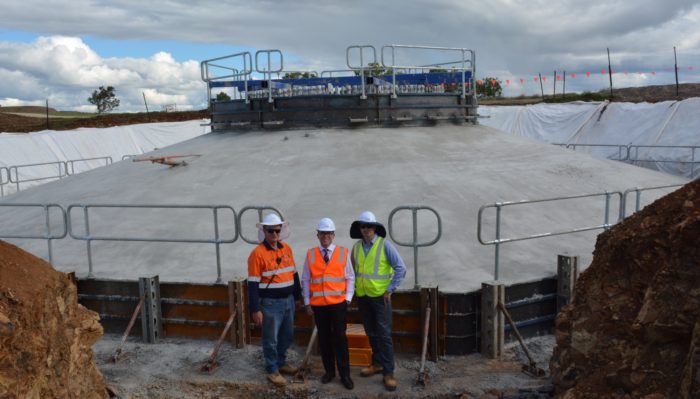 “This is incredibly exciting for our region as we welcome works starting on our region’s second wind farm, which will be the largest in the state, and generate 270 megawatts of electricity, enough to power around 110,000 each year,” Mr Marshall said.

“With the White Rock project well advanced just across the Gwydir Highway and More’s solar farm in the west, our region is fast becoming the renewable energy hub of NSW.”

The first wind turbine base, a 21 metre diameter, 3.7-metre deep hexagonal shaped concrete foundation, was completed only 24 hours before the MP’s visit.

This is the first of 75 wind turbine foundations which will be constructed on the Sapphire Wind Farm Project. Each foundation requires approximately 590 cubic metres of concrete, which equates to approximately 100 truckloads from the on-site concrete batching plant.

With the pour on Tower 26 now curing, work crews will complete the other 74 sites before the first 134-metre high turbine will be installed.

“Since being approved in 2013, CWP Renewables has been hard at work engaging landholders, manufacturing parts and finalising logistics for this impressive project,” Mr Marshall said.

“Now we’re seeing the first great leaps towards completion – and progress will only pick up from here.

“Advancements in technology have allowed for the project to use fewer, larger turbines, which will produce a similar amount of energy with a far smaller footprint than initially planned.”

While this has allowed CWP Renewables to build 40 fewer turbines, it has introduced new logistical challenges.

“Starting from September, we will see blades and turbines start to pass through the region – just as we have been seeing for White Rock – destined for the Sapphire Wind Farm,” Mr Marshall said.

“At 65 metres long, the blades are 10 per cent longer than what we’ve seen previously – and to handle the extra weight, the pylons are wider than those used for other projects.

“This is an exciting challenge for the drivers and builders – and will also see further investment in roads along the delivery route, benefiting drivers around Glen Innes and Inverell.”