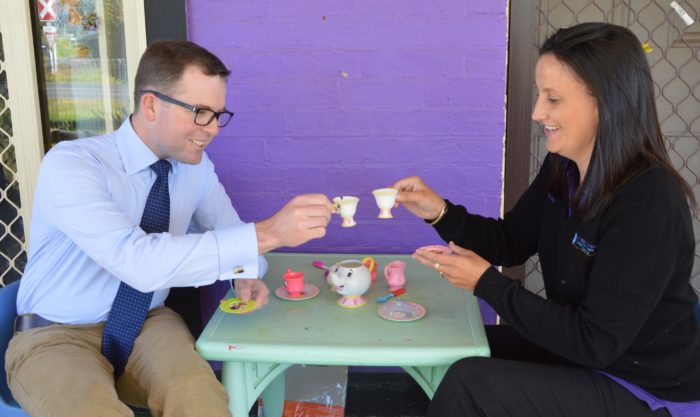 GUYRA pre-school educator Naomi Hoffman has been awarded a $10,000 scholarship to help build on her qualifications for teaching.

The mum of four already has a diploma in early childhood teaching but the news she’s won the scholarship means she’s able to enroll in a four-year bachelor’s degree at the University of New England from next year to upgrade her qualifications.

Northern Tablelands MP Adam Marshall delivered the good news to Mrs Hoffman this week and she’s over the moon – even though she’s going to continue to juggle her three-day-a-week job at the Guyra Pre-School and Long Day Care centre with family commitments and study.

“I’m just really excited about this; I wouldn’t have been able to do it without the scholarship and this will be a huge help,” Mrs Hoffman said.

She gained her TAFE diploma five years ago and hopes to undertake this next skills step with fulltime online external study to get her degree.

Mr Marshall has congratulated Naomi on the scholarship coup, saying diploma-qualified early educators were the first beneficiaries of his government’s commitment to strengthen early childhood education for children in rural and remote communities.

“Naomi is a caring and committed early childhood teacher and besides this award being great news for her personally, it’s great news for the children and parents of the Guyra preschool community too,” Mr Marshall said.

“The importance of quality early childhood education can’t be overstated because it gives children the best start in life.”

Mr Marshall said Naomi’s scholarship award was part of the NSW Government’s $80 million education blueprint for action program, and are specifically for those working in regional, rural and remote areas, outside of the big cities.

“We want our local educators to have the best qualifications and this scholarship scheme is helping them achieve those ambitions but also at the same time improve the delivery of early childhood education in our communities,” he said.

Mr Marshall said the next round of scholarships would open in April 2017 and he’s encouraging other early childhood teachers to consider applying.

More information is on the department’s website at www.dec.nsw.gov.au/what-we-offer/regulation-and-accreditation/early-childhood-education-care/scholarships/rural-and-remote-scholarships