SCHOOL BUS EXTENSION TO EBOR A VICTORY FOR LOCAL FAMILIES 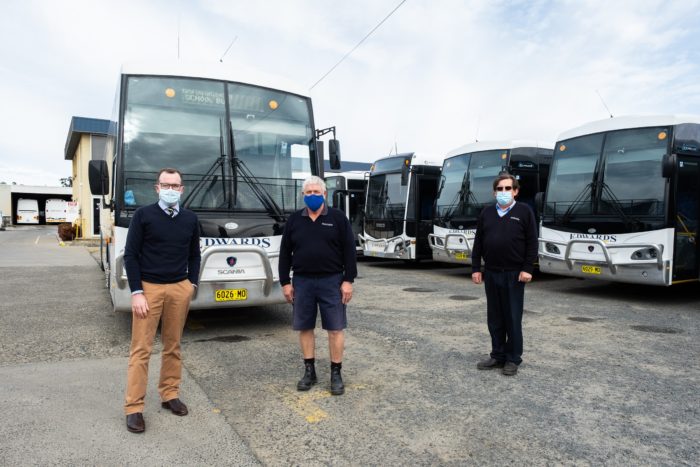 THE wheels on the school bus, which once went round-and-round only as far as Wollomombi, now go all the way to Ebor, with Northern Tablelands MP Adam Marshall celebrating the extension of the school bus route following a four-year community campaign.

Since 2018, multiple attempts have been made by families, with the support of Mr Marshall, to have Transport for NSW (TfNSW) fund a daily school and community bus service between Ebor and Armidale.

In June 2021, the Ebor community was notified TfNSW had reviewed its long-standing decision and Edwards Coaches would be funded to extend its Wollomombi service to Ebor.

“This is a massive win for families of particularly high school aged children who live in and around Ebor,” Mr Marshall said.

“With the service operational, 14 students are now catching the bus between Ebor and Wollomombi, taking the total number of school aged passengers on that route to 22.

“Previously, families were subsidised through the School Drive Subsidy Scheme to transport their children to Wollomombi to meet the school bus.

“While the cost of fuel was covered by the State Government, it didn’t make up for the time lost as parents travelled 120 kilometres each day.

“I want to recognise the work of all the parents and community who persisted to have this important transport link established.”

The bus departs Ebor at 6.50am and returns to the village at 5pm, Monday to Friday.

“This bus has the potential to improve the quality of live for all residents living in the Ebor area,” he said.

“For the elderly who are no longer confident driving themselves the 80 kilometres to Armidale for shopping or medical appointments, an early bus ride along the picturesque Waterfall Way is now the answer.

“The subsided route is incredibly cheap to travel, each way costing only $3.

“There is an expectation this bus will also lead to an increase in overnight visitation to Ebor, with people able to catch public transport to experience the stunning bushwalks around Ebor Falls and spend a night at the Ebor Hotel or local Airbnbs.

“It has taken a considerable community campaign to achieve this outcome. The bus route’s future will depend on the number of regular bums-on-seats, which is why I urge the community to catch the bus on their next visit to Armidale.”