SEASONS OF NEW ENGLAND MARCHES ON TOWARD MASSIVE EVENT NEXT MONTH 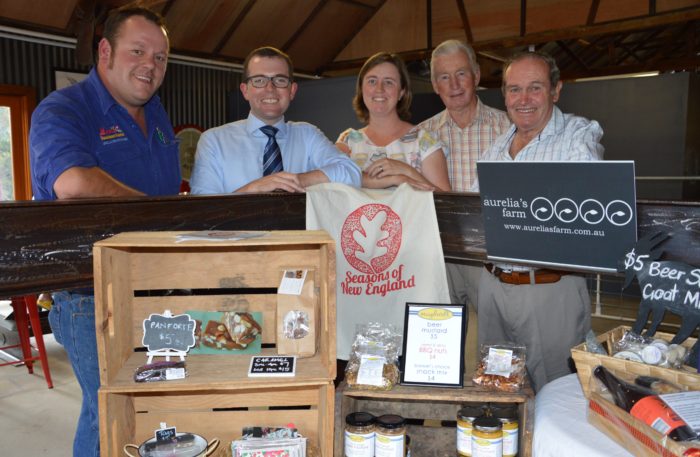 Launching Seasons of New England at the Uralla Brewing Company, Dale Goodwin of Dale’s Meats Uralla, left, Northern Tablelands MP Adam Marshall, Seasons of New England Co-ordinator Tara Toomey and Uralla Men’s Shed members Greg McClenaghan and Harry Davis. Wednesday, 17 February 2016 AFTER staging three very successful events, Seasons of New England organisers are now knee deep in local produce and preparing themselves for the next event which will be held at Hampden Park, Uralla on Saturday, 19 March.   Member for Northern Tablelands Adam Marshall recently joined committee members at Uralla’s famous New England Brewing Company to officially launch the festival and meet with several local producers who have a penchant for creating unique products for the event.   Mr Marshall said he was always amazed at the range of local produce available at the markets on the day.   “This will be the fourth Seasons of New England and it just seems to keep growing; it’s gained a wonderful reputation amongst locals and visitors as it showcases some of the best produce in the region,” Mr Marshall said.   “I’m particularly looking forward to sampling the lamb spit roast as I’ve been assured the lamb was raised on beer by-products. There’s also beer mustard to go with that and the brewery has created another unique brew based on native limes.   “There will be over 80 boutique businesses selling their produce on the day so, as they say, there will something for everyone at this Seasons of New England.   “It is unique experience as it provides a forum for our local producers, from the small, kitchen table businesses to the more established enterprises, to showcase their wares. Needless to say, it’s an excellent drawcard for tourist to our region.   “There will be an abundance of creative talent, gourmet flair and innovation to be discovered and I commend the committee on their enthusiasm and hope the district will support this wonderful day and turn up in their droves.”   Seasons of New England coordinator Tara Toomey said the event continues to grow and attracts producers as well as visitors from far and wide.   “The producers featured in Seasons are drawn from across the entire region with visitors to the event coming from event further afield,” Mrs Toomey said.   “Research has shown that a little more than 50 per cent of all visitors reside more than 100 km from Uralla, with many more from Tamworth and Armidale, so it represents a true showcase for the region.   “We will have sample bags and boxes, with help from the Uralla Men’ Shed, that have a selection of produce at below cost price, and on the day there will be a fabulous selection of food and goods throughout the day.   “We are also very excited to be coordinating the event with the annual Uralla Lantern parade with entertainment and meals into the evening.”   Uralla butcher Dale Goodwin, of Dale’s Meats Uralla, said he is planning for another huge sausage stampede with his famous New England Beer snags on the menu again.   “We will be flat out preparing thousands of our beer infused sausages again in the lead-up to this festival,” Mr Goodwin said.   “The most popular are the Pale Ale variety, and we have found that the take-home packs of fresh sausages to be a really popular item among the visitors.”   Regular updates about the event can be found on the website www.seasonsofnewengland.com.au and on the event’s Facebook page at www.facebook.com/seasonsofnewengland