SEATING WILL STAND AGAIN WITH $550,000 FOR ARMIDALE SHOWGROUND 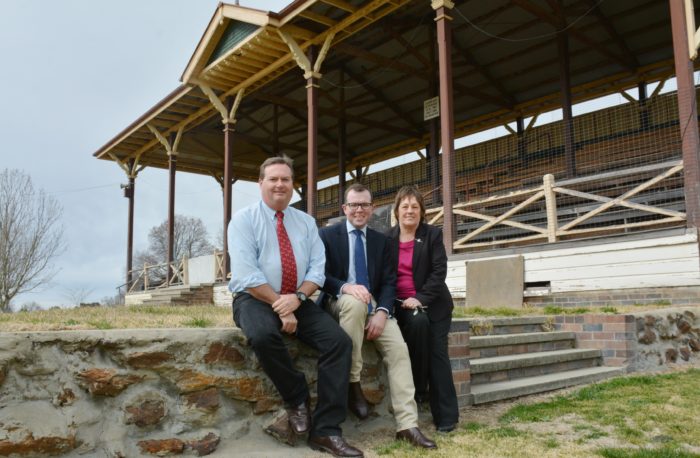 Mr Marshall said decades of unchecked water damage and rotted wooden foundations had left both century-old grandstands condemned and funding was needed swiftly if the grandstands were to be saved.

“Today is a red letter day for the Armidale Showground,” Mr Marshall said. “This funding and the work to restore these two grand old dames of the showground to their former glory will be welcomed by the entire community.

“Armidale is one of only a few showgrounds anywhere in the State with two grandstands of this age side-by-side and the community would not tolerate them being left to further decay and be knocked over.

“This is a huge win for the community and the grandstands will once again stand proud as the centrepiece of the showground.”

Last month Mr Marshall took the Showground Trust’s plans to restore the grandstands to Lands Minister Paul Toole. The MP told the Minister that demolition of the buildings wasn’t an option and requested funding be allocated to undertake the required restoration work.

The eastern grandstand was declared unsafe up to a decade ago, with its western twin succumbing to decay earlier this year – closed just before February’s Armidale Show. Mr Marshall said the two buildings would prove a valuable community asset once works were completed.

“The restored grandstands will provide essential amenities for local events, reopen storage space for community organisations and make our showground a much more picturesque and hospitable venue,” he said.

Mr Marshall said with the $550,000 secured from the NSW Government’s Public Reserve Management fund, rehabilitation works would begin without delay.

“This funding will allow work to start straight away with the western grandstand likely to be ready before the next Armidale Show in March next year,” he said.

“Restoration efforts will lift both of the century-old grandstands, remove and replace the rotting structural beams and rebuild and strengthen the foundations.”

Armidale Showground Reserve Trust Chairperson June Dangar said demolition was inconceivable – but the trust couldn’t find the funds for restoration on its own.

“I don’t think there ever was another option – they had to be repaired and I think the majority of Armidale locals will be thrilled to see them preserved,” Mrs Dangar said.

“It will be special to have them up, looking better and able to be used. It offers another opportunity for the community to use the showground and for people to see another side of the ring.”