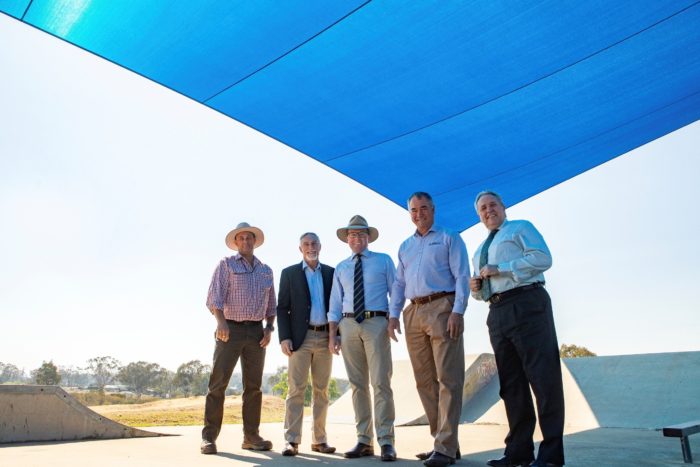 CHILDREN in Tingha will be kick-flipping their way through the summer holidays this year after Northern Tablelands MP Adam Marshall officially opened the completed upgrades at the Tingha Community Skate Park last week.

Mr Marshall said the $114,000 State Government-funded project had created a much-needed space for Tingha’s young people to hang out and socialise. The upgrades included new shade sails over the concrete skate park and under cover seating areas around the facility.

“Youngsters in Tingha deserve an upgraded skate park with proper shade for the summer months and now they have a facility which can be used all year round,” Mr Marshall said.

“These bright blue shade sails which now cover the entire skate park area will mean children in the community will be able to utilise the facility right through the six week summer holiday period, no matter the temperature.

“Communities like Tingha need a place where young people can go after school to socialise which is public and easily accessible and now with these two new undercover seating areas they have just that within walking distance of Tingha Public School and town.”

Mr Marshall said the shade sails were the culmination of great co-operation between Inverell Shire and Armidale Regional Councils.

“When this grant was awarded by the State Government last year Tingha was still located within the Armidale Regional local government area,” he said.

“Since then we have seen the shire boundary realigned and Tingha move into the Inverell Shire meaning both councils have been involved in the delivery of the shade sails and undercover area.

“I commend both Inverell Mayor Paul Harmon and Armidale Mayor Simon Murray for the efforts both their organisations have put into delivering this facility.

“With the end of the school year fast approaching I look forward to hearing how much use the skate park gets once holidays begin.”