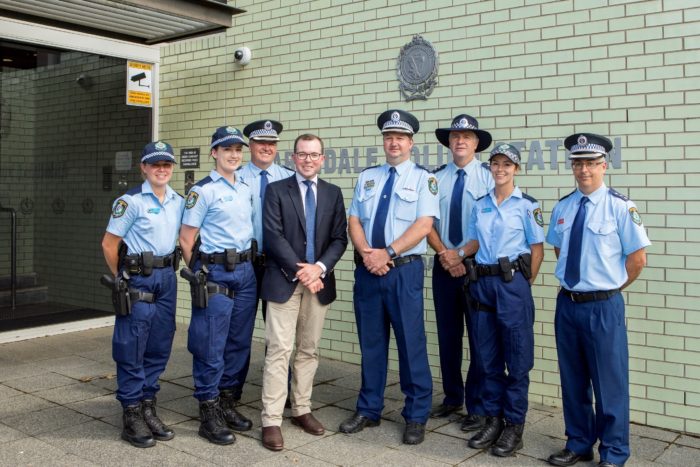 Northern Tablelands MP Adam Marshall, centre, with the last round of new police recruits for the region.

The six new permanent Police positions will be located at:

Mr Marshall said the new officers would see the region’s Police force swell to almost 220 general duties officers, with around 20 highway patrol officers on top of that.

“These new officers are among the first of 450 to be allocated across NSW as a result of the government’s $583 million investment for an additional 1,500 police over the next four years,” Mr Marshall said.

“Day in day out our police officers do an amazing job protecting the community and news of this latest allocation will mean residents will be seeing a lot more of our men and women in blue out and about in the community.

“Any additional police is always welcomed by the community and I am looking forward to personally welcoming the new officers later this year.

“While the stationing of officers is a decision made by the NSW Police Commissioner I have been working with police management locally and lobbying NSW Police Minister David Elliott to make sure these resources go where they are most needed.

“Ultimately the inclusion of these officers will free up assets across the police district, meaning police are spending less time working behind their desks and more time tackling local crime out on the beat.”

“With more officers coming online we need to ensure they have the highest quality and safest facilities to work from,” he said.

“It’s exciting to know alongside new local officers we will also be seeing a brand new 24 hour police station at Inverell, with the allocation of almost $9 million to knock-down and rebuild the existing 60-year-old overcrowded and dilapidated station on Otho Street.

“I will continue to work with local police to ensure they have the required staff and equipment needed to best perform their duties.”

“This announcement of six new officers across the New England Police District will make a big difference in keeping the community safe,” Inspector Best said.

“I look forward to those numbers moving in and undertaking some very proactive policing, engaging with the public and hearing exactly what concerns residents have in relation to crime in the community.

“Our officers enjoy this kind of work I think by simply having a heightened police presence out and about we will see a reduction in anti-social behaviour and more importantly greater community involvement in tackling local crime.”

Future allocations of positions will be determined based on resource requirements and how best to prevent, disrupt and respond to emerging crime issues.