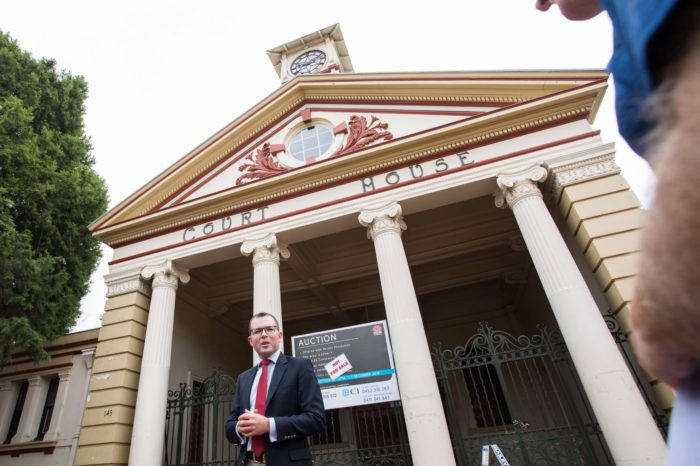 Northern Tablelands MP Adam Marshall outside the former Armidale Courthouse after the community won the battle to save it from being sold.

The campaign to have the former Armidale Courthouse placed on the State Heritage Register continues to crawl forward with Northern Tablelands MP Adam Marshall today announcing the Heritage Council of NSW has given notice of intention to consider listing the 160-year-old building.

Mr Marshall said the Heritage Council had moved to the next phase in what was proving to be a very thorough and rigorous, albeit cumbersome, assessment process.

“There is really no doubting the heritage significance of the former Armidale Courthouse and Sheriff’s Cottage, as they are among the oldest surviving public buildings in the New England region,” Mr Marshall said.

“It is the community’s wish to see these iconic buildings preserved and protected by the State Heritage Register and today’s announcement shows we are edging ever closer to the gavel coming down on that ruling.

“As part of the Heritage Council’s latest resolution it is calling for the public to make further written submissions on the proposal.

“I recognise advocates for the old Armidale Courthouse have previously been asked to show their support this way, however I again urge them to put pen to paper to express their views so we can get this spectacular building the recognition and protection it deserves.”

Mr Marshall said he was continuing to work with Attorney General Mark Speakman to ensure the old Armidale Courthouse remained in public hands for use by the community.

“For several years it has been my goal to have the building transferred to Armidale Regional Council to be used as a precinct for the community,” Mr Marshall said.

“I believe reopening the courthouse will play a pivotal role in reinvigorating the Beardy Street Mall.

“If it was to be used as a gallery or museum people would be drawn to the space, increasing the level of foot traffic in the struggling CBD.

“Having discussed this matter in detail with the Attorney General, I know he is very close to striking an agreement with council on the hand-over of the spectacular building and I think this latest development will only hasten that process.”

Submissions should be posted or emailed to the Heritage Council of NSW at the following address until 9 August 2020:

Please note that the Heritage Council is unable to accept submissions received after the above closing date.

The Heritage Council of NSW has acknowledge that the former Courthouse significance due to:
• the oldest surviving public building in Armidale and the New England region;
• the architectural legacy of three prominent NSW Colonial Architects – Alexander Dawson, James Barnet and Walter Liberty Vernon; and
• a fine representative example of courthouse buildings in NSW, retaining many of the common characteristics of regional courthouse buildings.

Nominations for the State Heritage Register are assessed for state significance against established criteria. The Heritage Council considers a draft nomination before accepting the nomination and progressing to the public submissions stage.

The submissions are then considered before a recommendation can be made by the Heritage Council to the Minister for Heritage, who makes the final decision on listing.