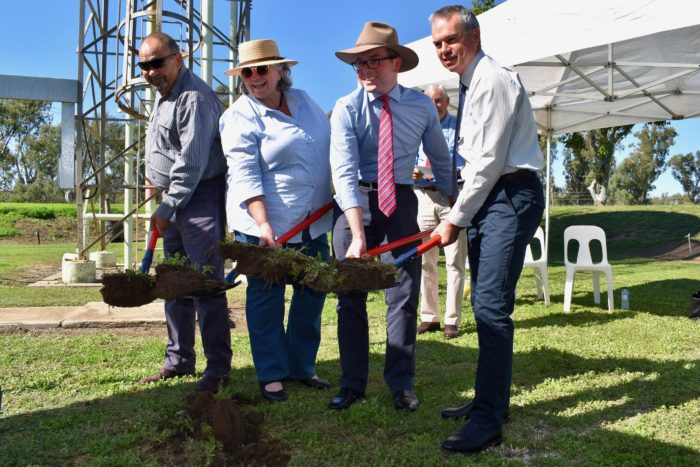 AN almost $5 million project to drought-proof the small northern NSW communities of Boggabilla and Toomelah is now officially underway.

The NSW Government is funding the total cost of the works, in the order of $4.6 million, from its Water Security for Regions program, with the project being delivered by Moree Plains Shire Council.

“This is an exciting day for the Boggabilla and Toomelah communities,”Mr Marshall said.

“This project will secure the long-term water supply of both townships through the construction of a pipeline that will allow each community to draw water from the other. It will also address water quality by way of additional treatment within the system.

“The new pipeline and associated upgrades will ensure Boggabilla and Toomelah residents can depend on reliable and clean water from their taps, even through the very dry times.”

Mr Marshall said the current water supply infrastructure for Toomelah had hit its use-by-date, with water sourced from a single artesian bore via an electrical pump. He said there have been instances when the town’s water supply has failed during the hotter months and water has had to be trucked in by council.

“For Boggabilla, silt from floods can clog up the existing water inlets, causing problems with flow and water quality,” Mr Marshall said.

“Through this investment, both towns will have the flexibility to pump water to where it’s needed, helping these towns grow sustainably into the future.”

The work to be undertaken includes:

A floating pontoon will be constructed on the Macintyre River at Boggabilla to hold the new water inlet – avoiding the silty, murkier water at the bottom of the river.

Mayor Katrina Humphries said the pipeline work would progress quickly and final planning for the other necessary infrastructure was well underway.

“The designs for the pontoon are nearly finished and council will be calling for quotations over the coming weeks,” Cr Humphries said.

“The current inlet works we’ve got have a lot of issues – they’re at a low level, so the siltation causes issues with our pumping system. With the upgrades, we’ll be able to extract water with a lot more confidence in its quality and quantity.”

Coffs Harbour-based company Coastal Works won the tender for the pipeline construction and will sub-contract out parts of the work to local companies.

Pipeline construction is due to finish at the end of July.