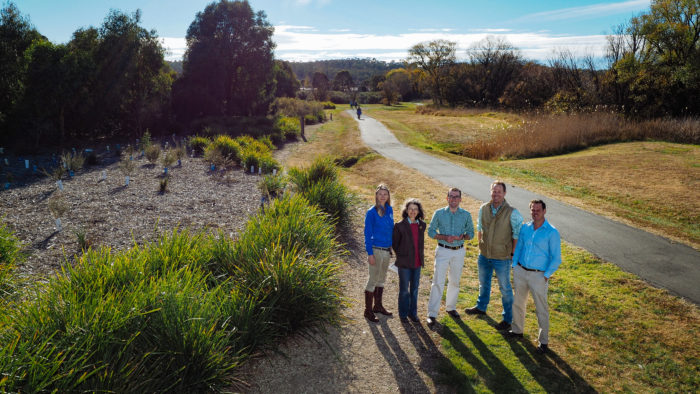 AFTER some financial turbulence over the last two years, Southern New England Landcare (SNEL) has bounced back in 2016 with the receipt of around $230,000 in grants in the past few weeks.

The organisation heard late last week that two of its projects, relating to the environmental restoration of farmland and Armidale’s Dumaresq Creek, have been awarded a combined $183,700 by the State Government’s NSW Environmental Trust.

SNEL chief executive Karen Zirkler said the funds have given the grassroots organisation some clear air to operate in over the next 18 months.

Northern Tablelands MP Adam Marshall announced the funding and applauded the news that SNEL was financially back on its feet.

“Landcare is as much about community as it is about environment, and governments need to support the viability of both,” Mr Marshall said.

“Landcare has evolved to be a highly diverse, community-based, hands-on environmental movement that represents a terrific investment for government money.

“Every taxpayer dollar invested in Landcare typically attracts many more dollars in donated capital and in-kind work from landholders and the army of volunteers that supports the Landcare enterprise.

Mr Marshall acknowledged the NSW Environmental Trust, which has been an important source of funding for SNEL.

“I thank the Environment Minister for providing the continuity of funding that means SNEL can pursue multi-year projects. Continuity is absolutely vital for building environmental and community capital,” he said.

The Trust awarded $99,998 to SNEL’s “Closing the Gap” project, which aims to build native vegetation corridors across the 25 km between Dangars Falls and Mount Butler.

The work will link the Eastern Falls forest with the woodlands running down the western spine of the Great Divide.

Another $83,700 was awarded to the Armidale Urban Rivercare Group to continue its work of transforming the city’s central creeklands from what Ms Tremont called a “grass desert” to a richly biodiverse living waterway.

The fund will be used to clear a thick infestation of weeds from 32,000 square metres of creekland near Douglas Street, and replant it with the diverse mix of vegetation that has been used to transform other areas of the creek.

Ms Tremont acknowledged the essential work of volunteers, who have put in thousands of unpaid hours to manage the creekland plantings and keep them free of weeds.

SNEL was also recently awarded $54,982 from the Federal Government for a second round of its Master Treegrowers agroforestry project.

The project will be followed by further development of the Peer Group Mentoring program started in the first round. Peer-to-peer education is part of SNEL’s ongoing re-invention of itself.

Last year’s financial crisis provoked an internal examination of the organisation, Ms Zirkler said, and how it functions in a world where funding models are shifting and “community” is no longer defined merely by geography.

Its success to date in the 2016 funding rounds, and a resurgence of interest in Landcare from its grassroots base, are promising signs that SNEL’s new direction will bear fruit.