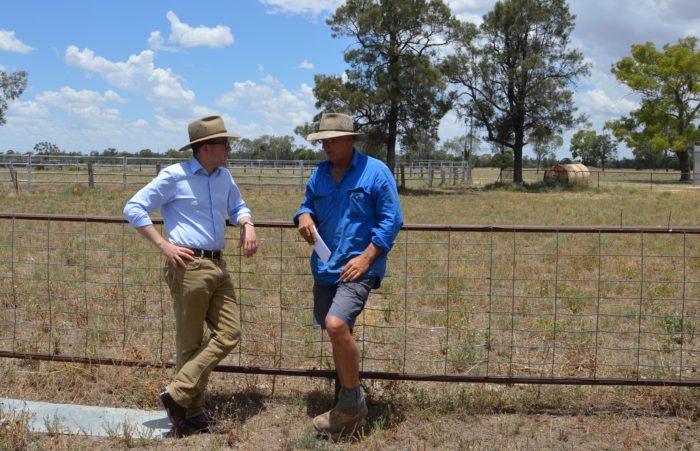 NORTHERN Tablelands MP Adam Marshall says a $5,000 grant will now give up to 200 people somewhere comfortable to sit when they use the Boomi Sportsground.

Mr Marshall said the new portable seating would mean it could be moved around the grounds for different groups and different sporting events that range from cricket to campdrafting and athletics to mud trials.

Mr Marshall said the State Government funding grant will allow the Boomi Sportsground Reserve Trust to purchase new portable and tiered seating for use at the grounds.

“The grant will be used to produce two tiers of seating, each 10 metres in length, and it will be built by a local Warialda engineering firm,” Mr Marshall said.

“They’re hoping it will seat up to 200 people and I know the local schools who use it are especially excited because they haven’t’ had anywhere to sit up until now, or at least anywhere safe to sit.

“The new seating will also be available for use by a wide range of clubs and groups who use the Boomi Sportsground, including various horse and equine groups and other sports clubs.

“It’s great news for Boomi and for the Trust, which is run by enthusiastic volunteers who give their time and skills generously.”

Mr Marshall said the funding was aimed at helping groups like the Boomi Sportsground Trust because their efforts helped not only their own members but also their local community.

He was in Boomi this week to meet with Trust members to deliver the funding news and review the plans for the project.

Trust secretary/treasurer John Oates told him the funding would help them “get more than just bums on seats”.

“The Trust is not sitting still by any means; they’re looking to provide better facilities for community groups while making the sportsground more user-friendly and also appeal to more groups who want to use it,” Mr Marshall said.

“They’ve already got their next project mapped out and that’s a major one for a new kitchen/canteen complex and they’ve already spoken with me about how they go about that.

“I’ve suggested they have a look at what’s been achieved at Dundee where the local group there were given a $40,000 grant just a few weeks ago to put in a canteen complex at their sportsground.”