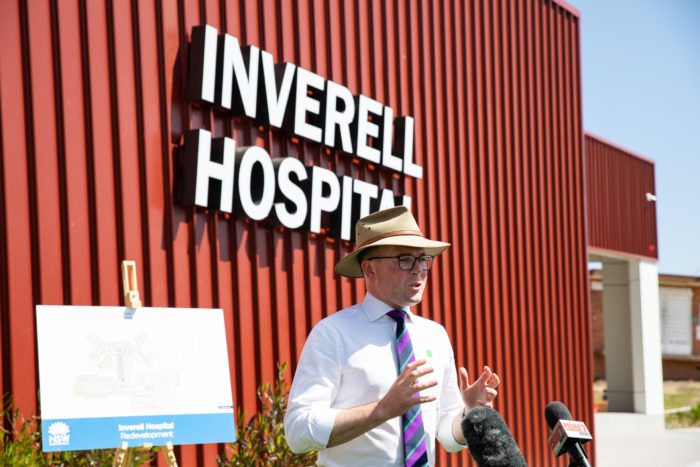 Northern Tablelands MP Adam Marshall is demanding answers over medical staff and service shortages at Inverell District Hospital and why the community is being kept in the dark.

NORTHERN Tablelands MP Adam Marshall has today issued Hunter New England Health management a show cause notice, demanding they explain why the community has been kept in the dark over a severe shortage of doctors and key medical staff at Inverell District Hospital.

Mr Marshall received multiple reports from members of the community last week that Inverell Hospital would be without a doctor in its Emergency Department for a period of potentially 10 days, because the external hire company failed to provide locum coverage.

“Secrecy is no way to conduct business, especially when it can mean a matter of life or death,” Mr Marshall said.

“Instead of trying to sweep this issue under the rug Hunter New England Health needs to front up and answer questions as to why Inverell is constantly being left without coverage at the hospital, why the community isn’t being told about it and what’s being done to address the problem.

“To exacerbate this further, over the weekend I was informed there was no doctor, anaesthetist or obstetrician at Inverell Hospital, with all maternity patients being transferred by ambulance to Armidale.

“I believe the ambulance service has also been undertaking at least two patient transfers a day to Armidale, for illnesses which should, and could be, treated in Inverell.

“I have written to Hunter New England Health CEO Michael DiRienzo and Minister for Regional Health Bronnie Taylor twice in as many weeks regarding the lack of doctors at Inverell’s emergency department.

“In reply, the official advice provided by Hunter New England Health only outlined the reasons why there was no coverage and included nothing about what action was being taken fix it.

“This is an appalling situation and I feel sickened by the stunning and ongoing incompetency of the Hunter New England Health management and their reliance on external agencies to fill vital positions in our hospitals.”

Mr Marshall said there needed to be a full and frank review of how doctors are sourced to work in rural and regional hospitals.

“The amount of funding expended to import locums must be investigated and steps taken to direct that taxpayer money into employing fulltime doctors to work in our hospitals,” he said.

“While modern medicine has improved patient outcomes in the main, in areas like staffing we have gone totally backwards.

“Our nurses and allied health staff are highly trained and capable of dealing with high pressure medical situations but the reality is they shouldn’t have to.

“We cannot continue to impose on their sense of duty and compassion to provide services and make decisions in the absence of a doctor.

“I expect the report from the Parliamentary Inquiry into Regional Health Care, to be tabled this Thursday, will be damning in its assessment of the public health system in the bush.

“I look forward to reading its findings which will no doubt tell us what we already know – our primary and acute health services are at crisis point and continuing to do what we’ve always done is no longer an option.”