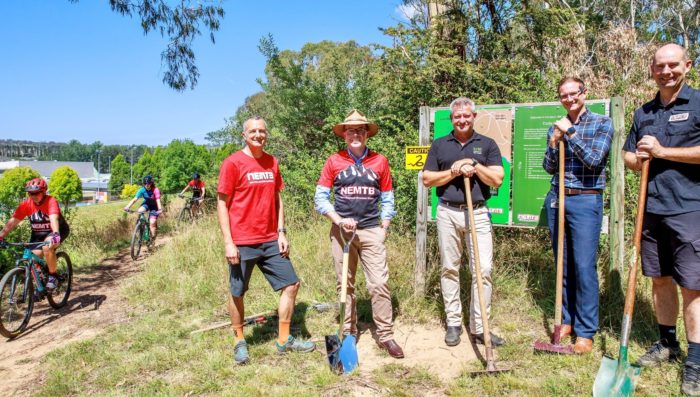 SEASONED and recreational mountain bikers will soon have new challenging tracks to conquer with work now underway on new trails at the University of New England in Armidale, thanks to a $147,780 injection from the State Government’s Stronger Country Communities Fund.

Member for Northern Tablelands Adam Marshall today joined the New England Mountain Bikers club to turn the first sod of soil on ‘Project Gonzo’, which will add a further five kilometres riding trails to the existing SportUNE trail network in the area north of Ring Road.

Mr Marshall said the development would include mountain bike trails of varying degrees of difficulty.

“Competition, enthusiast and recreational riders will soon have even more reason to visit Armidale, with these new trails sure to attract mountain bike events to the region along with people wanting to test their skills,” Mr Marshall said.

“This project will increase the existing trail network from eight to 13 kilometres, creating a track which can be ridden in a continuous loop.

“Associated infrastructure such as stock-proof fence, crossings, directional signage and walking paths will make the track safe and accessible to all.

“COVID-19 permitting, it is anticipated almost 300 competitors, including 100 international, will ride into Armidale in November for the World Solo 24hour MTB Championship.

“On average the international visitors will bring an additional 2.2 people to support them in the competition, for an average of a nine-day period. This means big economic wins for accommodation providers and the local economy in general.

“Project Gonzo is a game changer for this region, encouraging more people to engage with this already popular sport and creating new avenues to grow tourism.”

“It is very exciting that the mountain biking infrastructure in Armidale is being further developed with an additional 5km of professionally built trail available for local riders,” Mr Hosking said.

“The Development Application for the project was issued in January and it is expected the tender for the successful specialised contractor will be on deck early March, with construction expected to be completed by end of June.

“With the efforts of such passionate club members, UNELife, Armidale Regional Council and Adam’s continued support of mountain biking in Armidale it will continue to be a great place to live which and attract further National and now International mountain biking events to the region.

“Thank you to everyone that has assisted in their own way to allow this Project Gonzo to go ahead.”

The $500 million Stronger Country Communities Fund is part of the $2 billion Regional Growth Fund, which together with the $4.2 billion Snowy Hydro Legacy Fund is delivering once-in-a-generation infrastructure that generates opportunities, investment and jobs.

Round Four of the $100 million Stronger Country Communities Fund will open on 1 May 2021, with up to $50 million to be made available for the delivery and enhancement of women’s sporting facilities, including change rooms.

Guidelines and information on eligible applicants will be available on the Regional Growth Fund website in coming months.