STATES COME TOGETHER ON $460,000 UPGRADE OF MUNGINDI REC AREA 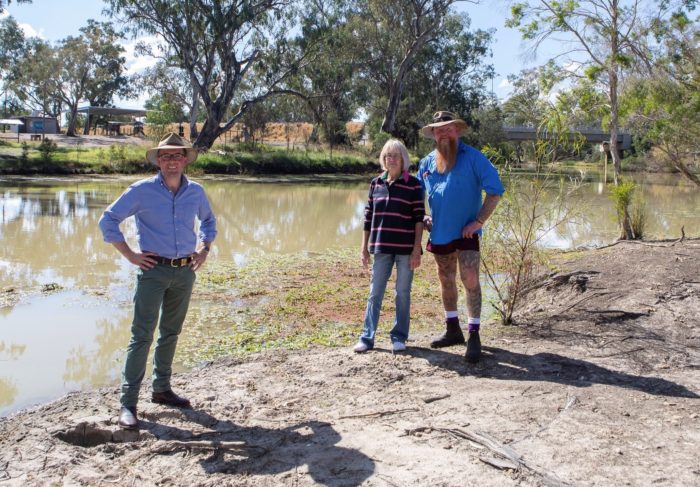 THE border between New South Wales and Queensland may be temporarily closed due to COVID-19, however that hasn’t stopped the two States from coming together to improve tourism facilities at Mungindi, with Northern Tablelands MP Adam Marshall today announcing an $184,000 grant from the NSW Government for upgrades to the Mungindi Recreation Area.

“At the moment we might be separated by a checkpoint, but when it comes to creating new tourism opportunities for border communities NSW and Queensland are on the same side,” Mr Marshall said.

“Located on the banks of the Barwon River, the Mungindi Recreation Area has become one of the region’s most popular stop-offs for travelling grey nomads.

“This funding, made available through the NSW Cross-Border Commissioner’s Infrastructure Fund, will support stage two and three of Balonne Shire Council’s upgrade of the free camping site, on the northern side of the border.

“Combined with a contribution from the Queensland Government, the site will be enhanced for its users with new fencing, irrigation system and barbecue shelters and solar lighting all to be installed.

“An additional pathway will also be put down along the water front to the Mungindi weir, giving fishers up close access to the spectacular Barwon River.”

“Initially, we just wanted visitors to have access to hot water in the shower block, but over time the upgrade of Mungindi Recreation Area has developed into a considerable, three stage project,” Mrs Harrison said.

“Last year Balonne Shire Council installed hot water in the shower block and immediately following that the community saw a dramatic increase in the number of caravans and motor homes pulling into town.

“Even though the Mungindi Recreation Area is on the Queensland side of the border it has provides significant economic benefit for businesses in NSW.

“Often we see caravans parked up for weeks at a time, with those people crossing the bridge to shop for groceries and petrol.

“This project really benefits the entire border region because those who set up camp for an extended period tend to travel for day trips, taking in the sites and spending money in other communities like Moree.

“Mungindi Progress Association is also in the process of seeking funding for a mural/sculpture walk around town as a means of directing foot traffic between important sites in the town, including the new river walk to the weir.

“It’s refreshing to see NSW and Queensland working together on a project which will greatly benefit the region and I want to thank Adam, the NSW Cross Border Commissioner, Queensland Government and Balonne Shire Council for supporting this project.”