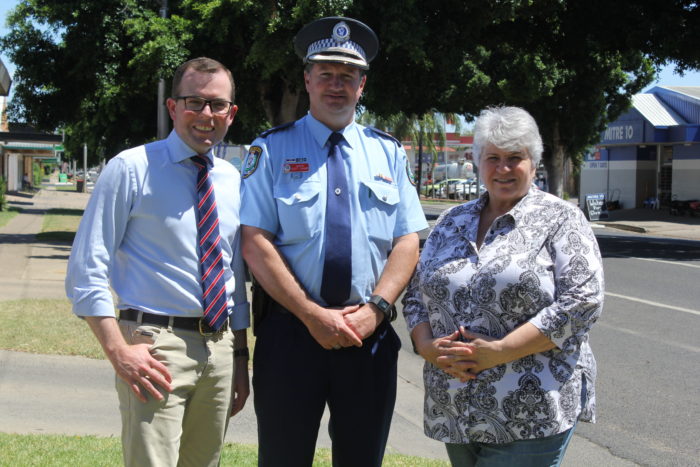 FOUR weeks into Strike Force Claymore, an extended police presence has left a serious impact on Moree’s underworld of violent crime and thuggery, with Member for Northern Tablelands Adam Marshall saying more is yet to come.
Weeks after demanding additional resources to battle crime in Moree, Mr Marshall today commended the work of local police and visiting officers.
“Strike Force Claymore has had tremendous success since it deployed in late November – with police ramping up their efforts in the weeks since,” Mr Marshall said.
“Officers have charged 30 people for criminal behaviour, stopped almost 800 vehicles, handed out 144 infringement notices, searched nearly 200 people, and filed 26 reports of children at risk.
“This broad net approach supplements a series of targeted strikes on suspected criminals – with specialist officers continuing to collect evidence to put more offenders behind bars.
“No one is above the law in Moree – if you commit crimes, seek to take advantage of your neighbours, and disrespect the community, you will be caught and punished.”
In 4 weeks, Strike Force Claymore has seen:
• 30 charges, including offences for serious violence, drug and drink driving, and drug offences,
• 26 reports of a Child At Risk to Family and Community Services
• Two alleged arson offences dealt with under the Young Offenders Act,
• 765 vehicles stopped for breath and/or drug testing,
• 27 bail compliance checks,
• 15 Apprehended Domestic Violence Order checks,
• 4 Suspect Target Management Plan checks,
• 195 searches of persons and vehicles,
• 20 licensed premises checked for compliance of staff and patrons,
• 60 ‘Move On’ orders issued for unruly or intoxicated persons.
Following a concerning spike of violent crime, including a violent attack on an aged woman, Mr Marshall called upon NSW Police Deputy Commissioner Gary Worboys APM to provide extra resources to the town.
Strike Force Claymore was quickly deployed, comprising additional officers from the Western Region Domestic Violence High Risk Offender Team, Target Action Group, Detectives, Police Dog Squad, Youth Liaison Officer and Traffic and Highway Patrol Command.
“Police are responding to fewer crimes each week, with serious offences slowly tapering off – a sure-fire indication that the right arrests are being made, and the message is getting through,” Mr Marshall said.
“This confirms the police’s initial assessment that a relatively small number of people are responsible for the town’s crime trends – they are now either behind bars or reconsidering their criminal behaviour.
“However, the good work cannot stop here. Strike Force Claymore will continue to target crime in high risk areas of Moree, supplementing the good work of local police and community groups.
“I have sought and received an assurance that the boosted police presence will remain until it is no longer needed.”
Mr Marshall recently met with Barwon’s new Local Area Commander, Acting Superintendent Scott Tanner, who will lead the ongoing police response in Moree.
“Barwon LAC has a powerful ally in Scott Tanner, who has brought a new enthusiasm and active leadership to his role,” Mr Marshall said, “Our discussion about the approach he will take to community policing has given me renewed confidence in quickly resolving these issues.
“Moree is filled with hardworking people – with the vast majority looking to grow the town and support the local community.
“These arrests will ensure that the town’s residents will no longer be held hostage by a criminal minority, and provide a fresh start for those seeking to better the region.
“To that end, I will continue to investigate additional resources for Family and Community Services in Moree, and work to implement the demonstrably successful Family Investment Model (FIM).
“We cannot arrest our way out of this problem – and empowered community groups will help ensure that the town’s young people see a future without crime and violence.
“I thank Moree’s police for their unending hard work, and the town’s residents for their stoic passion against ongoing criminality. The fight against crime is not easy – but we have the resources needed to win.”