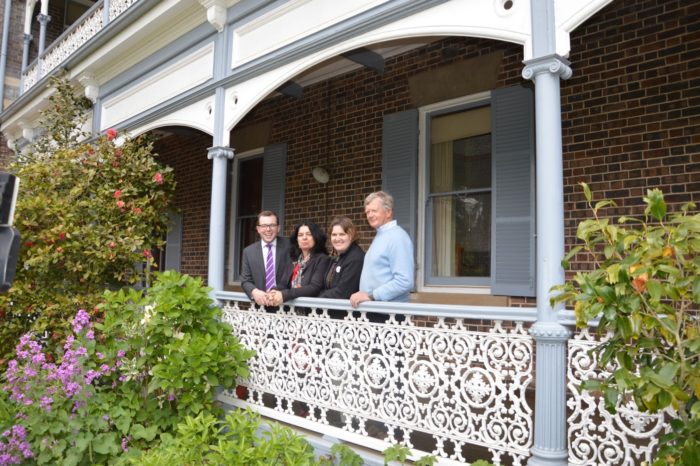 Mr Marshall said the Stuff of Tales arts cultural project will take some of the ‘stuffy’ out of old some of our oldest museums across the region west, dust them off and make them the stuff of characters and cultural tourism stories.

The Stuff of Tales project has been awarded $51,147 through a state government program which will see a partnership between Arts North West and the New England Writers’ Centre to focus a literary light on the celebrated museum collection pieces and their human history stories.

The iconic homestead museum is one of the six to be featured in the online and e-book publishing series.

The Roxy Theatre at Bingara, History House at Glen Innes, Railway Museum in Werris Creek, Powerstation Museum in Tamworth and McCrossin’s Mill in Uralla are the others to be featured.

“This is a really exciting project because it will bring to life some of our major historical buildings and museums but importantly bring those tales of history back into the spotlight,” Mr Marshall said.

“These are places of rich cultural heritage and there’s also some wonderful little gems of stories behind those times and who better to tell some of those stories and highlight some of the quirky and little known stories behind the doors.

“There’s an absolute goldmine of history here in the north and who better to open the pages of some of those tales than some of our most celebrated local authors.”

Ms Downer said the authors would be paired with museum volunteers and would produce e-book editions on each, including illustrations.

“We’re looking to get really engaging words to build the creative content and build the idea and promote how our museums are unique because too often people don’t know about them,” Ms Downer said.

She said the project timeline was two years and they were looking to hold workshops as part of the getting-to-know-you relationships between the literary partners and museum presenters.

Writers’ Centre chair Sophie Masson said the centre had been involved in selecting the celebrated regional authors for the series. These include John Heffernan, Ian Irvine, Fiona McDonald, Bronwyn Parry, Beattie Alvarez and Ms Masson, along with illustrator David Allan.

Mr Marshall said the collaborative project would not only raise awareness locally of the history of the museums and their localities and early communities but also serve to promote and publicise the diversity of heritage outside the region – and attract more tourists.

“Often we become blasé about what’s around us or we underestimate the value of what we have in our own backyards when it comes to our early stories and this is a project that will shine a light on that history and our stories,” he said.

The funding is under the Arts and Cultural Development Program and the Minister for the Arts Troy Grant said it supported artists and cultural workers which enriching the lives of people across NSW.

The Stuff of Tales is one of three grants Mr Marshall announced for the north today.

A $60,000 grant to the Armidale Cultural Centre and Keeping Place will see an extension to their programs while a separate $22,000 grant to the New England Writers’ Centre will underwrite a program for young writers to promote young adult fiction and provide outreach programs to schools and a dedicated children’s literature festival.

It will also continue its Youth Online outreach program to schools, and present two specialised festivals: ‘Sorcery and Spaceships’ focusing on speculative fiction and ‘Booked In’, the only children’s literature festival in regional NSW.