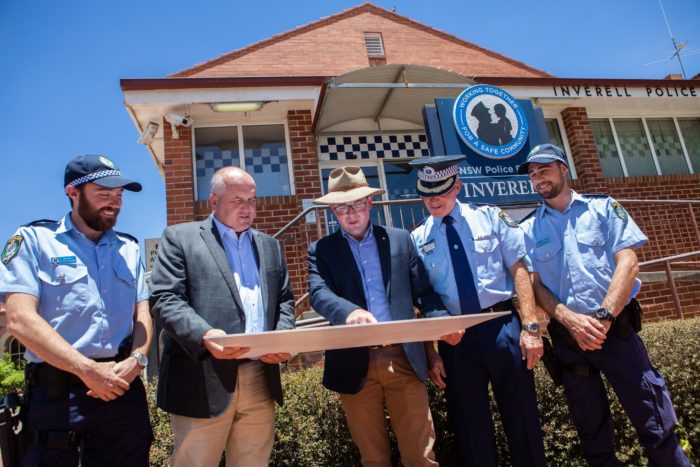 NORTHERN Tablelands MP Adam Marshall yesterday declared a new era of policing for the New England region was underway, with the successful tenderer announced for the construction of the new state-of-the-art 24-hour Inverell Police Station.

Mr Marshall was joined by Minister for Police and Emergency Services David Elliott, New England Police District Commander Superintendent Scott Tanner and successful tenderer Hutchinson Builders to mark the milestone and provide the community with its first glimpse of the future facility.

Mr Marshall said the project would not only deliver a state-of-the-art police station to service the community, but would also boost the local economy by providing construction jobs.

“For more than three years the community has been fighting, alongside local police, to make this project a reality and today we can finally say we have take-off,” Mr Marshall said.

“The concept designs show a two story, modern facility which will be large enough to comfortably cater for the more than 50 local officers, with new undercover parking bays, plenty of storage space, new main access, secure fencing and undercover access way connecting the police station to the Inverell Court House.

“I welcome the news such a reputable construction company like Hutchinson Builders will be working on this project and look forward to seeing the economic benefits which will flow into the community as they utilise local sub-contractors and source local materials.”

Mr Marshall said the project has required a lot of planning, with the demolition of the existing 60-year-old station taking time so as to limit the inconvenience to the community.

“Inverell is the only 24-hour police station in our region and I have made it clear there can be no disruptions to the status-quo while the new facility is being built,” Mr Marshall said.

“From early next year police will start moving across to the temporary station in the old motor registry building on Campbell Street, where they will continue to operate from until the build is finished.

“Unfortunately it is often the case to reap the reward you sometimes have to experience inconvenience and I thank Chief Inspector Rowan O’Brien and his Inverell officers for their cooperation in working from the temporary station while this process take place.

“Should everything go to plan I expect will we see the demolition of the old station start in the first half of next year with the project expected to be complete by mid-2020.”

“We would not be standing here making this announcement without the strong backing of the community and council for this new modern facility for our local police,” he said.