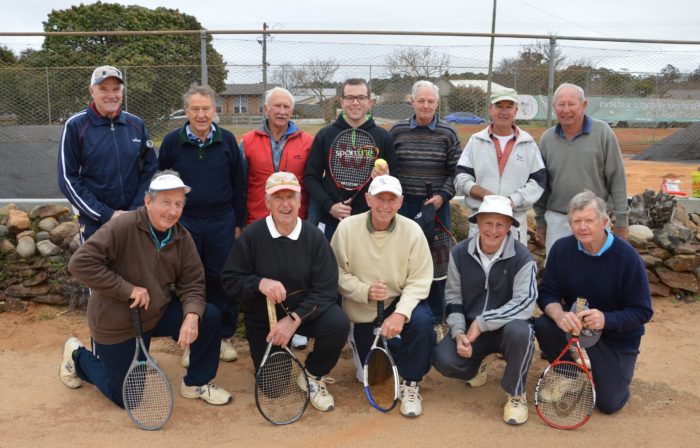 THE installation of artificial turf on one of the courts at the North Armidale Tennis Club is well underway thanks to a $19,000 grant from the State Government’s Sport Facility Program, Member for Northern Tablelands Adam Marshall announced today.

Mr Marshall joined with club members at the courts this morning to inspect the progress of the work. The MP even pulled out his racquet to join members for a hit during their regular Wednesday morning matches

“I am delighted the club was successful in its application for funding to undertake a major upgrade one of its three historic gravel-based courts,” Mr Marshall said.

“The members of the club were very keen to covert one of their courts to synthetic turf.

“Not only does it give players the option of two playing surfaces but cuts down on the time they have to put into the maintenance of their courts and costs.

“At present, the courts are all gravel so they are really looking forward to getting this synthetic turf surface down and playing the first matches on it in a few months.”

North Armidale Tennis Club member Michael Duncan said the club was delighted they’d received the grant and pleased they were able to improve the playing conditions for their members.

“We do all our own court maintenance so this will make life a little easier for us,” Mr Duncan said.

“It will improve playing conditions for our members and help attract new members to the club.”

After his hit this morning, Mr Marshall said he was looking forward to his next visit back to the club to play on the new court.

“It’s great to see our local sports facilities being improved for future generations and I hope to see even more players on the courts next time I’m back,” he said.

“Hopefully I can give a few of the members a run for their money on the court!”