TAFE NSW DIGITAL HEADQUARTERS ON TRACK FOR LAUNCH NEXT MONTH 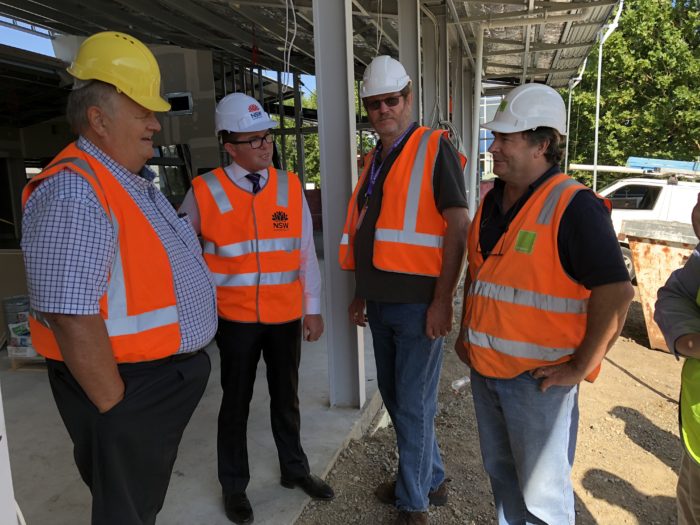 Mr Marshall, who is also the Minister responsible for TAFE NSW, confirmed that the Headquarters would create 51 new full-time positions, with 23 of those already filled and the remaining 28 under recruitment now.

“TAFE Digital is a huge boon for the Armidale community, with 13 of the first 23 staff relocating to the region with their families from as far as Brisbane and Melbourne to take up these new high-tech jobs,” Mr Marshall said.

“Of the remaining 28 positions being recruited now, I expect the vast majority to be people from outside the region, moving here to make Armidale their new home.”

Mr Marshall recently toured through the completed Digital Lab and the main headquarters building, still under construction. He said the benefits of the TAFE Digital Headquarters were already being felt across the region.

“It’s an exciting time for the city and the entire region with this and so many other projects ‘on the go’ and plenty more in the pipeline,” Mr Marshall said.

“In a capital city, this new TAFE NSW Digital Headquarters and the 51 jobs would be swallowed up. In Armidale, they and their families will provide a terrific economic boost to local business, swell numbers in our schools, and boost the capacity of community groups.

“Every house and business in Armidale is connected to the information highway by NBN’s high-speed fibre-optic cable.

“The city has arguably the best digital infrastructure of any urban centre in the country and this new headquarters helps build on that and show that not everything has to be in Sydney.

“I cannot wait to see the headquarters fully operational in Armidale and benefits begin to flow,” Mr Marshall said. “All of TAFE’s digital course delivery and content development, including cutting edge new technology, for the whole State will occur right here in our own region – that’s something we can all be very proud of.”

The TAFE Digital headquarters is located at the Armidale TAFE NSW Campus and will be officially opened at the end of March.