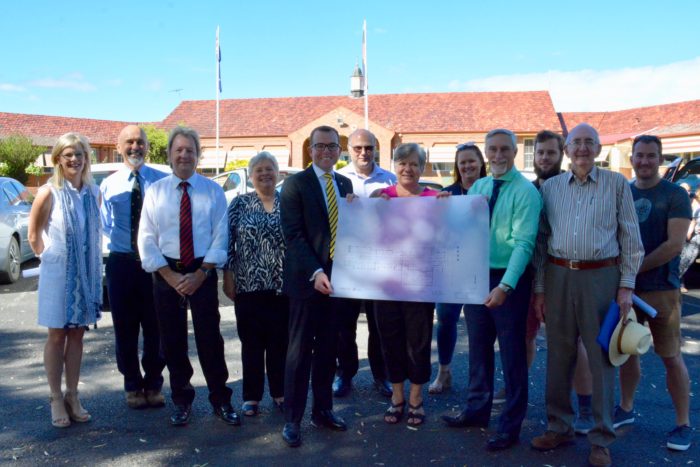 CONSTRUCTION on the $30 million redevelopment of Inverell District Hospital will start by the middle of this year, Northern Tablelands MP Adam Marshall said today, as he announced that tenders were now being called for the much-anticipated major health infrastructure project.

Mr Marshall was joined by a large contingent of community members for the announcement and release of the schematic plans, detailing the expanded emergency, renal, day surgery and inpatient clinical spaces.

“This is another historic milestone for this critical project and for the Inverell community,” Mr Marshall said.

“This is the health upgrade project the community has been waiting a decade for and now we’re just months away.

“This redevelopment will cater for the community’s health needs for decades to come and ensure locals are cared for in the most modern health facility anywhere in rural regional NSW.

“Over the next 18 months, the community will see the equivalent of a brand new hospital built at the rear of the existing facility.

“I know the local hospital staff are incredibly excited about this project too. They have been very patient waiting for this new hospital, purpose designed and built to modern health standards. It will be a much better place to work in every day.

“Having seen the recent results at Armidale (with the hospital redevelopment), there will be no comparison here between the old and the new hospital – it will be that good.

“This delivers on the commitment the government made in this very place three years ago, but it is only the start as far as I am concerned.”

Mr Marshall said the new hospital would offer all the services of the existing hospital, plus more.

“The new emergency department will be dramatically enlarged, with an extra three clinical spaces and separate rooms for mental health patients, children and sexual assault victims,” he said.

“The inpatient unit will have three more beds than the existing hospital, with paediatrics having its own secure ward and maternity getting a modern and larger birthing suite.

“Day surgery will be expanded to six beds and we’ll retain two operating theatres, one brand new one and a second new one in the next stage.

“Critically, the community will see a new and expanded renal dialysis unit, with eight chairs to cater for growing demand across the region for this service and spaces for palliative care as well.

“For the very first time in Inverell, the hospital will have a mixture of comfortable single and double rooms with ensuites for patients, so gone are the days of the large wards with little privacy.”

Tenders will be open for four weeks before the successful contractor is announced. Construction on site will start around the middle of the year and is due for completion before the end of 2019.

Like the Armidale Hospital redevelopment, Mr Marshall said preference would be given to local sub-contractors in the construction phase to ensure as much of the $30 million stayed in the local community.

“This highly competitive tender process will seek interest from proven companies, who will then compete for the right to build, ensuring the contract goes to the best person for the job,” he said.

“These works will seamlessly slot into Stage Two of the massive project, which I am asking the government to fast-track as part of the upcoming NSW Budget.

Mr Marshall said the redevelopment was essential not only for Inverell, but to ensure the health needs of the broader region were met.

“Inverell’s Hospital not only services the growing town, but caters to a growing catchment of people from region, while accepting overflow from nearby hospitals,” he said.

“When completed, this new hospital will be something the community can be very proud of.”