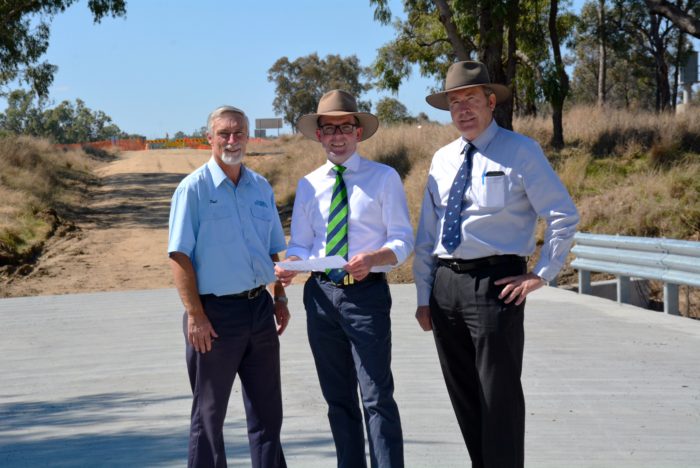 MOTORISTS and truck drivers between Graman and Ashford, in the north of Inverell Shire, will soon be cruising across a new smooth and stable concrete bridge, with a $1 million replacement to the decrepit wooden Tin Tot Bridge now in the final stages of construction.

Northern Tablelands MP Adam Marshall recently joined Inverell Shire Council Mayor Paul Harmon in a walk along the new bridge during a brief lull in construction, inspecting progress before the approaches are installed this week.

“This bridge has been a long time coming and will make the route between Ashford and Graman much more reliable for all vehicles, particularly for moving stock and other freight across the district,” Mr Marshall said.

“As one of the last timber bridges remaining in Inverell Shire, the replacement of Tit Tot has been a top priority for council and the NSW Government.

“The government has contributed $800,000 and council $200,000 to build a new, higher and wider full concrete structure and road approaches that can handle future demand.

“When construction finishes a higher dual carriageway will minimise interruptions and delays that some experienced while waiting for traffic to pass. In addition, truck drivers will appreciate the lifting of weight limits for the first time, allowing B-double trucks to finally take the short road instead of a lengthy detour.

“This new concrete bridge will reduce the maintenance burden on council and ratepayers and no longer be subject to extended closures after heavy rainfall. By every metric, this is a huge upgrade and I’m thrilled to see it approach completion.”

Mayor Harmon said the days of the timber bridge in Inverell Shire were numbered.

“This is a great project for Inverell Shire – by removing the load limit, it opens up great economic benefit for the mainly beef farmers in this part of the region,” Cr Harmon said.

“It goes a long way towards improving our road infrastructure in the Shire. We’ve been very greedy in our bridge replacement program and this is almost the final seal upon those plans, which is great for our residents.”