TINGHA SKATEPARK SET TO SAIL INTO A SHADY SEASON WITH $114,000 GRANT 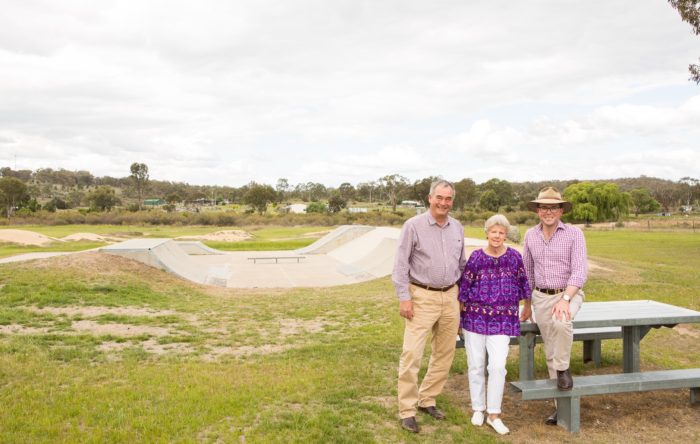 A STATE Government grant of $114,000 will deliver shade sails and benches to the Tingha Skatepark and make the play space a better place for young kids, according to Northern Tablelands MP Adam Marshall.

Mr Marshall announced the funding, from the NSW Stronger Country Communities Fund, yesterday in Tingha with Armidale Regional Council Mayor Simon Murray and Tingha matriarch Audrey McArdle and said it would bring much-needed summer sun protection for a recreational hub in the village.

Mr Marshall said he was pleased to see the project receive funding, after he’d gone into bat for the proposal earlier this year, believing it was a piece of infrastructure badly in need of a good upgrade.

The project will deliver shade sails over the park and benches to make the facility more user-friendly and encourage greater use of it during summer months when the weather makes it hot, uncomfortable and dangerous.

“The young people of Tingha deserve an upgraded skatepark with proper shade, so they can use the park all year round, and I’m glad to say they’ll have that now,” Mr Marshall said.

“The skatepark at Tingha is a magnet for hundreds of young people who live in the village and the upgraded facilities are something the residents and youngsters have all identified as a priority.

“Tingha is a small community of approximately 1,200 residents, with a large Indigenous population of around 20 per cent of residents. Around a third of residents, or 400, are aged between five and 17.”

Armidale Regional Council will manage the project and Mayor Simon Murray has welcomed the funding.

“The skatepark is a valuable hub for young people in Tingha, as a meeting place and somewhere for people to be healthy and active,” Cr Murray said.

“It will be a much more appealing place to spend time once the new cover is in place, so the NSW Stronger Country Communities grant was very welcome news.”

Mr Marshall said two covered areas will be installed next to the skatepark, with platform benches and tables to be added, as well as the big shade sail over the skating area.

“Local residents say installing shaded amenities will improve the amenity and usability of the recreational space, and given the popularity and importance of the skatepark to young people, as well as their parents and carers, the benefits are far-reaching,” Mr Marshall said.