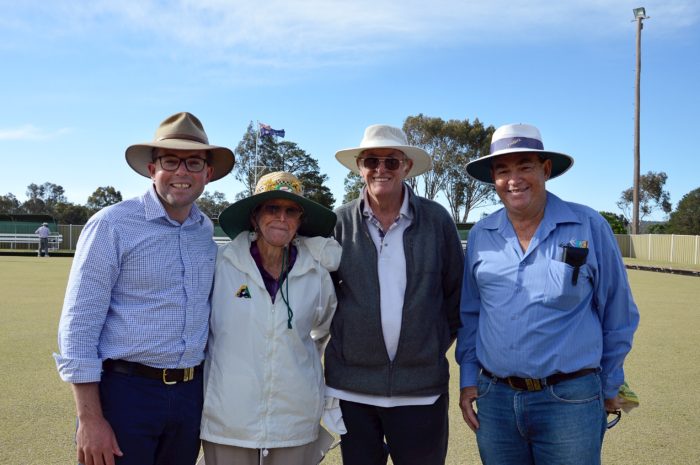 INSTEAD of all hands on deck to shift the watering pipes, bowlers in Tingha will be turning the tap to autopilot, thanks to a $28,615 splash of cash from the NSW Government, delivered by Northern Tablelands MP Adam Marshall.

“This is great stuff for us; it’s going to save us money on water but also lots of volunteer hours,” Club President Jock Single said.

“By being able to water the green at night and automatically, will save us around 30 per cent of the water we use now – we just won’t lose much without the evaporation.

“We water twice a week for eight hours each time and it’s a matter of manually fixing pipes each time, but now it will only take 15 minutes with one big hose to set it up. That’s a saving of 16 hours a week in volunteer hours, so it’s terrific.”

Mr Marshall said he was thrilled to deliver the good news to club members.

“Funding for a project like this means so much to the club, its membership and the community,” Mr Marshall said.

“Not only will the new irrigation system save the club money, it will take a huge load off a small and ageing volunteer base.

“This new automatic system will allow the club to set and forget. The green will receive more consistent watering at just the right rate.”

The Tingha Sport & Recreation Bowling Club was established in 1984 and boasts a rugby league field, cricket ground and golf course, as well as the bowling green and central clubhouse.

“The manual watering system on the green is the way they’ve been doing it since the club was established, so this is a great advance for us, saving our members lots of time,” Mr Single said.